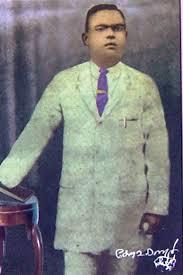 Poykayil Yohannan was a Dalit activist, a poet and a social reformer from the erstwhile Princely state of Travancore. His place of birth is in Kottayam district of the present-day Kerala state. He is known amongst his followers as Poikayil Appachan or Kumara Gurudevan. Poikayil Johannan or Poykayil Yohannan was a Christian Preacher by profession. He was responsible for the establishment of the Prathyaksha Raksha Daiva Sabha or God's Church of Visible Salvation. The reason behind the founding of this organization was the disillusionment he had got from his close association with various Christian groups in the country. Through this organization, he wanted to tell his followers that the way of spiritual liberation helps them to break the chains of bondage or slavery, and the view of caste discrimination. In order to help his followers to physically free themselves from the clutches of the caste discrimination, he had set up a chain of industrial training centers and schools to educate and equip them for their independent existence.


Poykayil Yohannan was born into a Christian family on February 17, 1879. His parents were Kandan and Lechi of Paraiyar community. His birthplace was Eraviperoor in the Pathanamthitta district of the present-day Kerala state. His original name was Komaran. Later his name had to be changed to Yohannan, as he was working as a slave in a Shankaramangalam-based Christian family near Eraviperoor. Since he was an ardent lover of books, he used to read a lot to assimilate the knowledge from them. As a result of this attitude, he became well versed with the principles of Christianity. Apart from reading the books on general topics, he also had read the whole of the Bible to understand the religion of Christianity better.

In his lifetime, the members of Dalit communities practiced untouchability amongst themselves. Yohannan was deeply pained by this tendency amongst the members of the lower castes. In order to trace the root of this custom in the society, he started reading books on these topics. From books, Yohannan realized that the members of Paraiyar, Pulayar and Kuravar communities shared a common lineage in the history of Kerala. Therefore, he decided to bring the members of these communities on one platform by properly educating them about their lineage. To make this happen, Poykayil Yohannan left the Shankaramangalam Christian family and started to meet the members of his community personally to generate this awareness in their minds.

Experience With Other Christian Communities

After leaving the Shankaramangalam Christian family, Yohannan joined the Marthoma Christian church to liberate himself from the clutches of discrimination and untouchability. At that time, the members of the Marthoma Christian church were considered to be reformists. After a while, he realized that the members of this reformist sect also considered Dalit Christians as inferior beings. This harsh realization made him to shift his loyalty to another religious sect by the name Brethren Mission. In the new sect also he had to face the similar predicament. In light of the treatments received by him in different Christian communities, Poykayil Yohannan concluded that the Indian Christian communities continued to treat the people based on their caste. According to him, this was against the basic tenets of the Christian religion.

After this realization, Yohannan decided to leave the religion of Christianity and form a new organization for the liberation of Dalit community members. With this conviction in his mind, he formed a new organization by the name Prathyaksha Raksha Daiva Sabha (PRDS). From this point in time, he was referred to as Poikayil Appachan or Kumara Gurudevan. After the formation of a neo-reformist organization, Poikayil Appachan met people from different communities personally and educated them about the need for living in a dignified way. For this purpose, he exhorted his followers to liberate themselves from the clutches of caste equation through the twin powers of education and enlightenment.

Popularity of the Organization

To strengthen his movement, Yohannan threw open the gates of his organization to all Dalit people, irrespective of their religious affiliations. Thus, Dalit Christians and other Hindu Dalits became the valuable members of his organization. In order to convince his brethren, he reasoned that the Holy Bible accounted only for Jewish History, not for the life and culture of Indian Christians. This revelation went viral in the community. As a result of this, many members of his community decided to abandon the Christianity and embrace the PDRS. As a result of this exodus, his religious sect became powerful factor in the Kerala political space.

In order to cater to the growing requirements of his organization, Poikayil Yohannan decided to buy 125 acres of land in different parts of the erstwhile Princely state of Travancore. The management of these properties was done from the organization's headquarters at Eraviperoor. Using these properties, the places of worship, schools and training institutes were constructed at different places in the Travancore state. For developing and igniting the minds of his brethren, a number of vocational training institutes were developed to impart quality training to them. These educational institutions were set up with the liberal government aid and support.

Stint in the Legislative Assembly

Poykayil Yohannan was also a member of another Dalit advocacy group by the name Sadhujana Paripalana Sangham, which was floated by Saint Ayyankali to further the cause of the group. His stature as the Dalit leader grew several bounds due to his association with several Dalit associations, including that of Ayyankali. After doing the ground work, Yohannan decided to participate in the state parliamentary politics. He was nominated to the Sree Moolam Praja Sabha for two times. It is the Legislative Council of the Princely state of Travancore.

In Sree Moolam Praja Sabha, Yohannan made a historic presentation on the plight of the depressed classes in the state. Through his forceful speech, he spoke on the topics of the education and employment of Dalit youths and the existing disparity between Dalit Christians and Syrian Christians. On the topic of discrepancy, he further elaborated that the Christian converts from communities such as Paraya, Pulaya, Kuravar and Marvar were discriminated against by the majority members of the Christian community. After the forceful presentation on Dalit issues, he dwelled upon the measures he prescribed for their betterment. This included job reservations, land allotments and fee concessions to uplift the lifestyles of hapless Dalit families.

Poikayil Yohannan was a Dalit leader, a poet and a social reformer from the Pathanamthitta district of Kerala. He was also a Christian preacher who was highly concerned about the welfare of the depressed classes in the state. In the initial days of struggle against the caste discrimination, Johannan believed that the members of the Christian communities would lend their helping hand to his caste members. Some years later, he learned in a hard way the existing caste discrimination in those Christian Communities. Hence, he decided to form an organization to support the cause of his fellow caste members. This organization was christened as Prathyaksha Raksha Daiva Sabha. Johannan encouraged both Christian converts and Hindu Dalits to take membership of the organization. By pooling the resources donated by the members of the organization, a land bank was made. This land bank was used to construct numerous institutions for the benefit of its members. Because of the dedication and good work shown by him, Yohannan was twice nominated to the Sree Moolam Praja Sabha. At the Praja Sabha, he made a forceful presentation on the plight of Dalits in the state and suggested some measures to improve their living conditions.