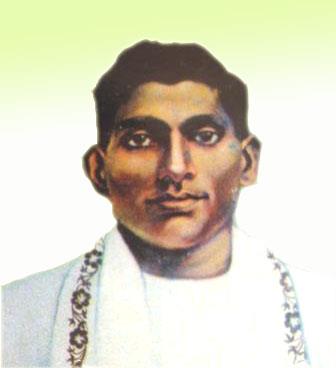 T.K. Madhavan was a social reformer from Kerala who spearheaded the struggle against the then existing practice of untouchability in the state. He was one of the leaders who organized the famous Vaikom Sathyagraha to bring landmark changes in the social fabric of the state. As a result of this sathyagraha in which many prominent leaders of the time participated, the doors of the temple and the roads of the state were thrown open to the untouchables and non-Hindus by a famous proclamation by then Maharajah of Travancore. In him, Sree Narayana Guru saw the flicker of an organizer and an orator who could mobilize the general public on one platform to launch an all out attack on the malice of caste and color system.

T.K. Madhavan was born on September 2, 1885 in a place called Karthikapally in the central part of Kerala. His parents were Kesavan Channar of Alummoottil family and Ummini Amma of Komalezhuthu family. Madhavan had his formal education in his village only. He could not complete his higher education. Yet the thirst for acquiring knowledge still lingered in him. As a result, he gained good writing and speaking skills in English language on his own. At the tender age of 17 years, young Madhavan made an astonishing speech in the Sree Moolam Praja Sabha on the topic of the Disabilities of Ezhavas in Government Service. This speech had a good impact in the minds of the members of the Praja Sabha. The members of the Sabha, including then Diwan of Travancore V.P. Mahava Rao, appreciated the effort put in place by young Madhavan.

During his time, the untouchables, Muslims and Christians were not allowed to compete in the examinations that lead to their selections in government jobs, especially in Revenue and Defense departments. T.K. Madhavan was strongly against this trend in the society. He was advocating for human equality. For this purpose, he coordinated with like-minded people and conducted meetings at several places in the state. Due to his continued effort at highlighting the discrimination in government jobs, finally the government of the day had to permit the enrolment of Muslims, Christians and lower caste members in its Revenue department.

Another struggle for which he organized the mass was the struggle against the liquor lobbies in the state. In this struggle, T.K. Madhavan had the support of Sree Narayana Dharma Paripalana (SNDP) Yogam. This struggle has an important place in the history of Kerala. During this struggle, Sree Narayana Guru gave his famous message against the liquor consumption, telling his followers to shed the use of liquor. Guru further told his followers not to serve it or drink it. After several rounds of protests and agitations, then government decided to prohibit the illicit liquor businesses brewing in the state within few years.


During his lifetime, the socioeconomic condition of the state was not that good. Hence, T.K. Madhavan was not happy with the situation in prevailing in the situation, especially those of untouchables, Christians and Muslims. Moreover, the people from the lower castes were castigated from the general activity of the society. These trends really pained him. In order to organize the struggle against these oppressive tendencies, he organized a struggle to encompass all the sections of the society. This struggle was supported by all the social reformers of the time, including Mannathu Padmanabhan, Sree Narayana Guru, Ayyankali, etc. Slowly this struggle took the mammoth proportion and the people from all sections of life started to participate in it. This struggle was called Kshethra Praveshana Prakshobham. This struggle ended on the positive note with the promulgation of Temple Entry Proclamation by Maharajah of Travancore. This proclamation allowed the lower caste members to use the temples for worship, and roads and other facilities for their betterment.

In order to further help the cause of granting freedom to the untouchables, T.K. Madhavan met Mahatma Gandha in Thirunelveli and appraised him about the problems involving the lower caste and their discrimination based on the caste system. This meeting had the secret blessings of Sree Narayana Guru. As a result of this meeting, Mahatma Gandhi participated in Koknadha Congress and requested the Congress party members to solve the problems of untouchables by supporting them. Later, when Mahatma Gandhi visited Kerala, he stayed at Shivagiri Ashramam and met with Sree Narayana Guru. In this meeting, T.K. Madhavan participated and shared his views with Guruji and Mahatma Gandhi. In a subsequent meeting, Mahatma Gandhi exhorted the party leaders from the state to participate in the struggle and make the movement a grand success. In response to the request by Mahatma Gandhi, many leaders from the Congress party participated in the sathyagraha. They include K.P. Kesava Menon, K. Kelavan, Krishna Swamy Iyer participated in the struggle and got themselves arrested by the police.

Contributions as a Member of SNDP Yogam

During his association with T.K. Madhavan, Sree Narayana Guru learned that his disciple had the immense talent in organizing and mobilizing public support for the cause of the lower caste. So, Madhavan was assigned the task of structuring the organization so that people can access its hierarchy without any difficulty. As part of the restructuring plan, T.K. Madhavan conducted meetings and organized workshops to enable the people come and interact with the members of the organization. Through these interactions, he compiled the ideas given by different people and implemented them effectively to make SNDP Yogam a people-friendly organization. In order to further popularize the organization and its principles, he came up with innovative ideas such as Educational seminars and Industrial exhibitions and Ayurveda seminars to popularize the concept for which the SNDP Yogam stood. Apart from these, he requested his Guru Sree Narayana to participate and to talk about the good works done by the organization to make it look genuine in the eyes of the general public.

T.K. Madhavan was a social reformer, a leader and an orator. He was largely responsible for the development of the organization. Through his innovative ideas, he attracted the members of the lower caste to the organization and gave them proper education through different activities. This enabled the organization to grow and support various welfare activities. T.K. Madhavan was one of the key leaders who organized the Vaikom Sathyagraha. Through his contacts with other like-minded people, he mobilized the required support to make it a grand event. The dimension of the sathyagraha was such that the government had to accept the demands put forward by the mass. As a result of this event, the members of lower castes got the rights to use temples, roads and other facilities for the common good.