Velli Velichathil to be credited with the first malayalm movie exclusively shot in Muscut, the capital of Oman is gearing up for release. John Brittas who is much known as a journalist and television anchor is making his debut as an actor through this movie. Directed by Madhu Kaithpram, 'Velli Velichathil' is themed around the life, dreams and problems of Keralaites who work in Muscat. 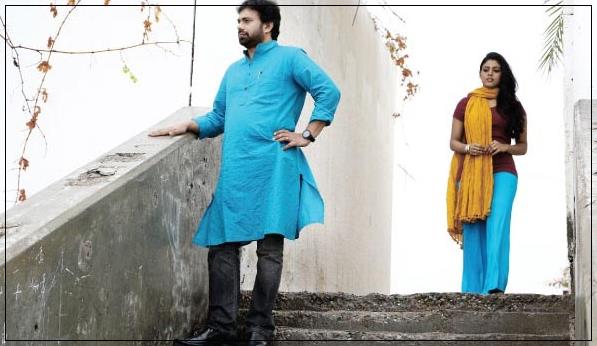 Upendran( John Brittas) works as an executive in British Airlines International company. For taking a break from the hectic works and to make his mind refreshing, Upendran used to visit a club. Filled with thoughts about his home, Upendran was not much interested with the cultural programs which were organised to entertain the visitors.

Once, he meets a club singer and dancer Thanuja (Iniya) whose elegance and perfection really impressed him. With an open mind, he met the lady and talked with her. During their chat, Upendran realized that, she was forced to come to Muscut due to her life situations. Cute and smart Thanuja who was running a dance academy had high interest over classical art forms. Due to unavoidable reasons, she reached the club and was performing dance at her best. She wished to keep herself away from homeland and danced for the club members.

Upendran who could understand her feeling was deeply interested in her character and became too close to Thanuja. His affection toward her later creates problems in his family life which forms the crux of the movie. Geetha Pothuval will be seen in the role of Upendran's wife.

Lalu Alex, Tini Tom, Suraj Venjaaramoodu, Ravindran, Sreejith Ravi, and Karamana Sudheer will give life to other prominent characters in the movie. For the lines of Kaithapram, the tunes are set by Deepankuran. Velli Velichathil is produced by Ramesh Nambiar under the banner of Well Flow. The camera of the movie is helmed by Sini Sidharth. The screen play and dialogues are handled by popular writer C V Balakrishnan.

As the final works are over, the movie is expected to reach theatres by the end of May 2014.