There would not be any other women who had become a sensation in Kerala due to her negative publicity. Both print and visual media have spent a part of their time giving out well-run news circling around her. Anyway, Mangalam, one of the popular weekly in Kerala is gearing up to deliver an exclusive report with her interview in their upcoming issue. 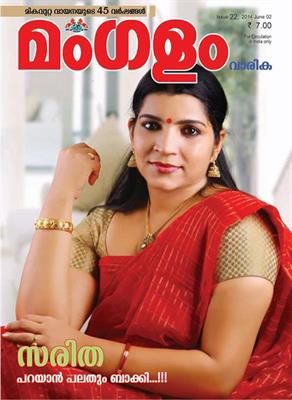 Much interestingly, Saritha will feature as the cover girl for the Mangalam weekly June 2014 issue. Saritha has given a preferential chance to appear on the weekly which is normally adorned by movie actresses or models. Even since the solar scam, Saritha was in the media sharing her thoughts while trying to prove her innocence.

Mangalam has already started advertising on the upcoming issue and hinds some details about the interview. The issue which comes with a caption 'Saritha has left a lot of things to say', would be a detailed interrogation and her disclose on some interesting facts that she hasn't till exposed to the media. Being the mother of two children, Saritha also talks about her marriage. During a juncture, she reveals about her painful life story which truly would magnetize the readers.

The first episode of the much long interview would be intriguing for the readers who wished to know more about Saritha. She who has openly shared her private life with the media has much to share with readers in the coming issue too. Being a person who has grabbed the attention of the people and even could make people to win her autograph would have more readers who would like to know her inner stories.

As sensational issues have more demand among the people, the current issue of mangalam weekly could make a record sale. So, if you wish to know the divulging words of Saritha, do make a visit to your nearby book shop.