Actress Amala Paul and tamil filmmaker A L Vijay officially got engaged today at a traditional Christian ring exchange ceremony ceremony held at St Jude Church, Choondi in Kochi. The couples were blessed by invited guests, family members, fans and close friends from the film fraternity. Even though, the engagement was a private affair, there will be a five-hour-long star-studded sangeeth ceremony held at CIAL Convention Centre, Nedumbassery attended by celebrities. 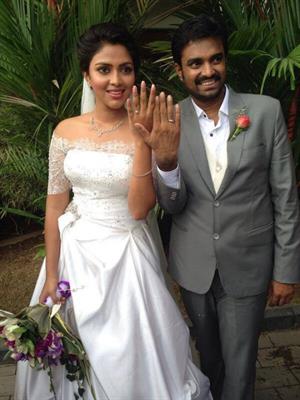 Amala Paul was the prime attraction sporting a custom-made white wedding gown designed by Delhi-based designer Himangi while Vijay looked fresh in a grey suit. After the ceremony, the couple thanked the guests, media personalities and sought their blessings. She will wear a lehenga designed by celebrated designer Anita Dongre for the sangeet.

The marriage will be held in Chennai on 12th June as per the Hindu customs which will be followed by a grand reception. Amala would wear a traditional Kanjeevaram saree for her marriage while a lehenga designed by Sabyasachi Mukherji for the reception on the same day. She will be grace will the ornaments handpicked from Amraapali and Joy Alukkas.

23 year old Amala decided to get married as she was settled professionally and wished to add Vijay to her personal life to make it complete. Amala openly stated her love with the much acclaimed filmmaker few months ago through 'online'. Vijay and Amala have worked together in couple of tamil movies. Impressed by his professionalism, humility and respect for women truly brought the souls together.

She would complete those projects which have been already committed. Amala has completed the first schedule of Rajesh Pillai's 'Mili' and would rejoin the team after her marriage. Much interestingly, Amala and Vijay wish to make their wedding more meaningful by incorporating donations for charity. Instead of bringing bouquets or gifts, guest is expected to deliver cash gifts which will go as donations to 'Ability Foundation'.