The Directorate of Higher Secondary Education (DHSE) Kerala will publish the Plus One exam results today. As the valuation of the Plus One exam conducted during the months of March and April got completed couple of days ago, the Directorate decided to announce the results on 18th June 2014. Candidates who had appeared for the exam can check their results through the official websites by giving their roll numbers. The Kerala plus one school wise result can also be checked through the website. The results are prepared after adding the CE marks to the marks that students received in the written exam. 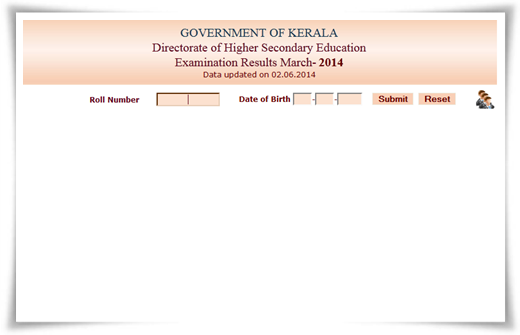 The publication of Plus One results online has facilitated the students to know their results without any intricacy. For those students who are seeking revaluation and wish to get photocopies of the answers sheets should submit the application form after remitting the fee to the school principal before 30th June. The forms will be made available in the schools and the HSE portal.

The date of Kerala DHSE Plus One improvement exam 2014 will be announced shortly while the centralized valuation camps would be followed later. In 2013, the supplementary/improvement examination was held in September.

Kerala Plus Two Say Exam 2014 & Plus One Admission

The valuation of IInd year Say/Improvement started on 12th June and for the subjects Biology, Sociology, Computer Science, History, Home Science, Business Studies, Islamic History, Electronics, Electronic Service Technology and Communicative English the process started only on 16th June 2014. Meanwhile the Allotment process for the Plus One Admission 2014 has reached the next phase. With more than 5 lakh students applied online for admission in various courses, the trial allotment would be published on 23rd June at the official website.

The trial allotment will be made on the basis of the options registered and the rank of the candidate. Applicants can check the allotment through Single Window System (SWS) in the HSCAP portal and make corrections before the stipulated time. After the publication of the first allotment, those who found their names in the list should have to remit the fee.

Check the Plus One result online

Students can check the Plus One results online through the websites which are exclusively designed to publish the result.

Kerala HSE plus one results 2014 published

Kerala DHSE plus one (+1) results 2014 has been published today (18th June). The Directorate of Higher Secondary Education (DHSE) Kerala has published the result of the plus one first year examination held in March 2014. Candidates who had appeared for the exam can check their results through the official websites by giving their roll numbers. The Kerala DHSE (plus one) first year 2014 school wise result can also be checked through online portal.

Kerala Plus One 2014 Revaluation, Photocopy and Scrutiny Application Forms