Even though hundreds of magazines reach the Kerala market every month, it is very interesting to know the successful story of 'Vanitha' the most celebrated women's magazine. With a circulation of more than 7 lakhs, this magazine is well known for its innovative approach in each issue. 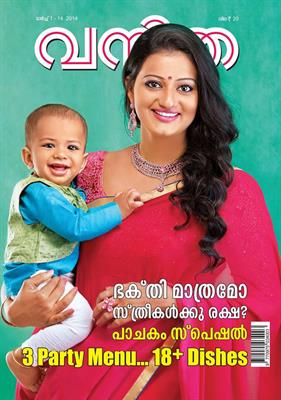 Founded by Annamma Mathew, the magazine made his first entry in 1975. Initially started as a monthly, it later turned into a fortnightly in 1987. Annamma Mathew, a pure visionary was a woman who has contributed enormously in the fields of social service, cookery, journalism and literature.

From a readership of 3.7 lakhs in 2004, the magazine has doubled the figure in 10 years. Currently in the top slot of highly read magazine in India, Vanitha has a wide circulation in gulf countries too. With the advancement of technology, the magazine has a huge readership through online which keep the number still counting. Vanitha covers information about traditions of Kerala, fashion accessories, jewelleries and interviews with celebrities.

The best part of this magazine would be the discussions on social problems and articles related to food. Special sections for Kids, Cookery special, Recipes, Style & Trendy, Astrology, Travel, Consumer Guidance and Health makes the magazine favourite among the family readers. It is much interestingly to know that celebrities in Kerala do update each issue of this magazine even during their busy schedule. During special occasions like Onam, Easter, Christmas and New Year, special double issues will reach the hands of the readers.

Printed in multi coloured pages, 'Vanitha' is being designed for the present generation. Even though, the name translates to 'woman' in Malayalam, it is not strictly a women's magazine but widely read by men also. In 1997, the hindi edition of the magazine was launched.

A core team of experts in various topics think and execute innovative articles which attract the readers. The magazine which comes with an affordable price is worth for money.