The first allotment list of Kerala Plus One Admission 2014 will be published on 30th June 2014 at the official website of Department of Higher Secondary Education (DHSE). Students who had applied for the Plus One admission 2014 under the single-window system can check their allotment status from the HSCAP website from 30th June 2014. Students can check the allotment status from the broadband internet facility equipped in the schools.

With the complete admission procedure done through the Single Window System (SWS), students can check their allotment status by providing the application number and date of birth. Students should navigate to candidate login section and login by entering his/her application number, password and district there. The trial allotment got published on 24th June, applicants were given ample time to make changes in the options if needed.

After the publication of the first allotment, the admission process will move to the next stage. Students who have received allotment should secure admission in the respective schools before the stipulated time. As per the procedure, a second allotment will be published for those students who couldn't make into the first list. The main allotments will come to an end on 9th July 2014. The first year plus one will commence on 14th July while the admission will be closed on 27th August 2014.

Kerala Plus One allotment schedule 2014 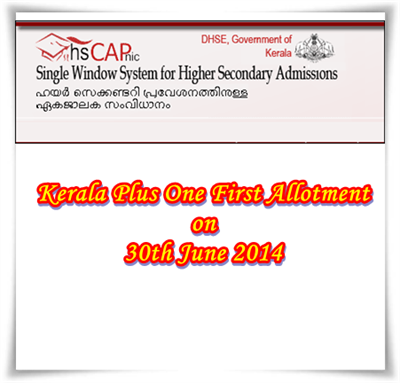 The Kerala Plus one allotment schedule 2014 with important dates concerning the admission procedure is given here.

The starting of Plus One classes will be delayed compared with the previous year. In 2013, the classes began on 28th June while in this academic year the allotment process is expected to get completed by second week of July. It is very important to prepare the teachers training module which is being conducted in three stages. The two months training will be given to 27,000 teachers.

Even though, the allotment would satisfy students who seek admission for plus one, as only 3.67 lakhs seats are available in various streams under the higher secondary, more than 1 lakh students have to opt for the open school system in 2014.

Kerala plus one trial allotment list 2014 on 24th June

Kerala plus one (+1) 2014trial allotment result has been published today (24th June) at www.hscap.kerala.gov.in, the official website of HSCAP. Students who had applied for the Plus One admission 2014 under the single-window system are advised to check their allotment status from the website from 24th June. If needed, students can edit the options before the time earmarked for revision.

Check www.hscap.kerala.gov.in to know Kerala plus one (+) first allotment results 2014. As the Kerala HCAP (DHSE) plus one first allotment list got published today, students who had applied for the Plus One admission 2014 under the single-window system can check their allotment status from the HSCAP website from 29th June 2014.

Kerala Plus One (+1) second allotment 2014 results are now available at HSCAP website. Candidates who have applied for the Kerala Plus One Admission 2014 and couldn't find their names in the first allotment can check their allotment status from www.hscap.kerala.gov.in, the official website of Kerla Higher Secondary Education Department. As the admission process is made through the single window system, the results should be checked in the online portal.