The Kerala Public Service Commission has completed all the three phases of Village Extension Officer Grade II exam. The final phase of the VEO exam was held in Ernakulam, Pathanamthitta, Palakad and Kozhikode. The Kerala village extension officer exam was based on an objective type test (OMR Valuation). With more than 6 lakh candidates appearing for the exam conducted in three phases, it gave a rare opportunity for the PSC job seekers to try their part to get their dream job. As the syllabus carried questions related to current affairs, mental ability and general English, candidates who had a better knowledge about the various topics could get into the top slot. 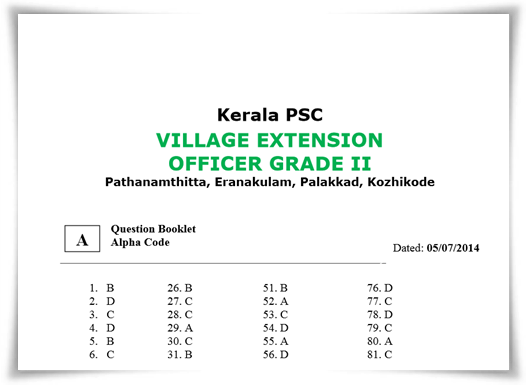 Have a quick look at the major topics from the Kerala village extension officer exam (VEO) 2014.

The Kerala village extension officer exam (VEO) exam was of 100 marks with 1 hour 15 minutes as the time duration.

According to procedure of the Kerala PSC, after the preliminary exam, a short list comprising of selected candidates will be published. In the next stage the candidates who found their names in the list will be called for an interview. After the crucial evaluation, the final rank list will be prepared and it gets published in the PSC website. According to the arising vacancies, those who got listed in the final table will be appointed to the posts.

Kerala PSC Village Extension Officer Grade III Answer Key of Ernakulam, Pathanamthitta, Palakad and Kozhikode are available. Candidates who had appeared for the third phase of exam can go through the answer key and check with their question paper. The answers available here is not final while the candidates need to check it with the official website of Kerala PSC to know the final answers.

Kerala PSC Village Extension Officer Grade II Answer Key of Trivandrum, Kottayam, Idukki, Wayanad, Kannur (TVM, KTM, IDK, WYD, KNR) are available. Applicants for the next phase should go through the village extension officer previous questions and answers to know the pattern of exam. The first phase of the exam was held on 7th June while exams of Kollam, Alappuzha, Thrissur, Malapuram, Kasargod will be conducted on 21st June and last phase exam in Ernakulam, Pathanamthitta, Palakad and Kozhikode.