'Star & Style', one of the most popular entertainment magazine housed by Mathrubhumi has published its July 2014 issue. Like its previous edition, this issue of 'Star & Style' is tight packed with interesting articles which could entertain the reading community. The cover page which features actress Reenu Mathews has a high storage capacity of holding attractive news and articles directly from the malayalam film industry. 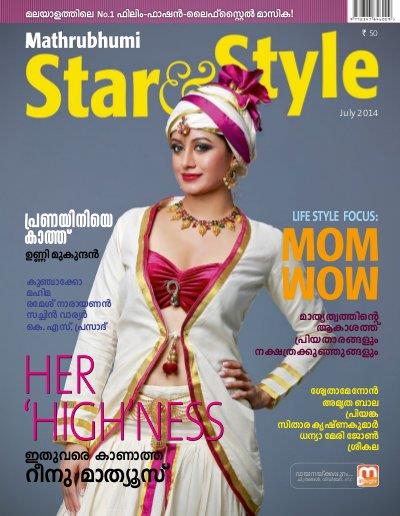 The major highlight of this issue will be exclusive interviews with Swetha Menon, Amritha Bala, Priyanka, Sithara, Dhanya Mary Varghese, Sreekala, Unni Mukundhan, Kunchako Boban, Mahima, Ramesh Narayanan, Sachin Warrier and K.S.Prasad. An article titled 'His Highness' featured on young Reenu Mathews zooms into the inner life of the actress who rose to stardom in a very short period. This exclusive chat with Reenu will give an insight to the readers about the reel free life of their favourite actress.

In the life style focus section, a feature titled 'Mom Wow' keeps the interest high as the celebrities like Swetha Menon, Amritha Bala, Priyanka, Sithara Kirshnakumar, Dhanya Mary John and Sreekala open their minds with the readers and their start life and loving babies, their next heaven.

Young heartthrob Unni Mukundan shares his thoughts about his filmy career and future life plans. A heart touching journey made actor Kunchacko Boban and photographer Madhuraj through the endosulfan affected areas in Kasargod for the shooting feature film 'Valiyachirakulla Pakshikal' directed by Dr. Biju give a memorable experience for the readers. Musician and hindusthani singer Pandit Ramesh Narayanan speaks about her singing career along with his upcoming movies like 'Alif', Otta Mandram'' White Boys' and 'Ennu Ninte Moideen'.

In 'Gurumughangal', a column handled by actor Mohanlal, he tells about his life experience with ace director I V Sasi. He shares his three decade long relationship with the hit filmmaker who has lent his face many popular movies directed by the legend. So this issue of 'Star and Style', which has already clinched the hearts of millions of malayali readers, would be more special during this July. As the Star & Style is one of the top rated Life Style magazine which focus on film and fashion trends, it is well praised by the readers for its innovative approach in delivering content much readable for the present generation.

Positioned as a complete film, fashion & Lifestyle Magazine, the current issue of 'Star & Style' comes with other regular columns like Box Office, Cine News, Marumozhi, Star Jam, New Releases and Star Net. This magazine can truly fit the bill for those interested to know about the latest trends from the malayalam film industry. So grab your copy of 'Star & Style' magazine from the nearby book vendor later before it leaves the stands.