With less than a month remaining for the Kerala PSC Sub Inspector of Police exam around 2 lakh candidates who have applied for the job is utilizing their time in between the previous question papers and building up their general knowledge? Unlike the other tests, those who prepare for Kerala PSC exams need to be vigilant from choosing books to performing inside the exam hall. Other than testing the general awareness of the candidates, most of the questions are meant to test their sense of answering questions. From a conventional way of asking questions, PSC has gone a couple of steps forward. As most of the exams are attended by lakhs of candidates, a single mistake can shatter the dreams and hours of hard work.

Why Sub Inspector is a prestigious job?

It's not only in India but around the world, working with the Police department is considered to be high-status affair. Many youngsters prefer to join the Police academy more than with the Territorial Army as the job is very challenging and esteemed. Being a Sub Inspector with the police department has always been a dream of all young people. Just by knowing the number of people attending the written exam, one can get the knowledge about the intensity of interest.

Here is the syllabus of the Sub Inspector of Police 2014 exam as notified in the Kerala PSC website. 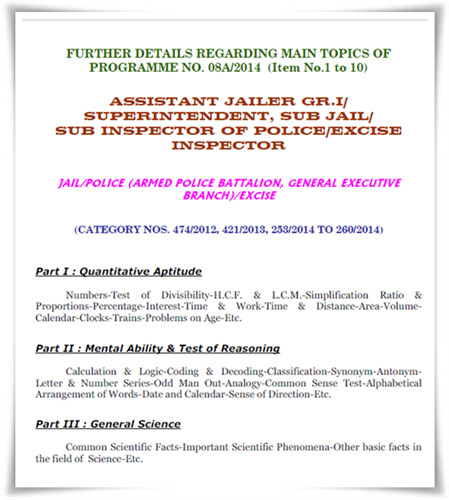 If the number of applicants is large in number, a conventional method of written exam can be used to find the best performers who could be promoted to the second stage of selection. While going through the applicants for Kerala Sub Inspector exam, it gives a clear picture about the number of applicants. So, find a place in the top rankers, a well planned hardcore training is required. As the selection of the Sub Inspector exam is combination of mind and body, candidates should give prime importance to both physical and intellectual development. With less than three weeks remaining for the written exam, tight preparation should be envisaged.

Tip No. 1 – Mental Preparation: As there is no shortcut to success, real time hard work and consistency will pay the return. Well knowledge about of the syllabus and drafting a simple timetable is the basic factor of exam preparation. Using Mnemonic techniques and making notes on important terms & names would improve the memory and also will stay as a close aide while attending the exam. Form groups and organize Group discussion based on topics related to the syllabus would bring positive results. Assemblage of likeminded candidates and conversing about social relevant issues will quicken and sharpen the thoughts along with reducing the fear of sharing ideas. 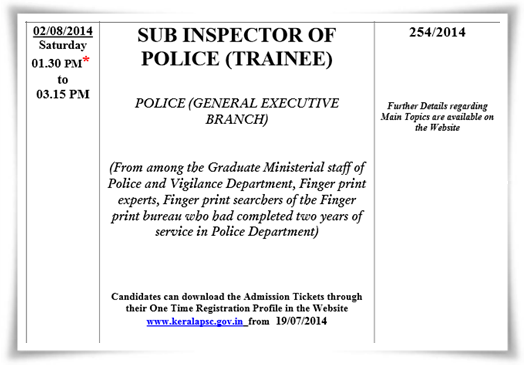 Time management is the most important factor which functions from the moment of preparation till leaving the hall after the examination. As per the pattern of Kerala PSC exam, a candidate will get only less than one minute for answering one question (100 questions to be answered within one hour and fifteen minutes). So it is very important to have a prior knowledge about the time and usage of time wisely.

According to the experience of top ranked candidates, one should have to score 90 or correct answer out of 100 questions to go the next stage and get a call for the interview. Taking as much Mock Test and answering to previous question papers of Sub Inspector exam would do wonders in the exam hall. With limited vacancies and unlimited applicants, this exam is meant for those who could crack the challenging set of questions.

Tip No. 2 – Physical Preparation: According to the Kerala PSC Sub Inspector selection process, after the preliminary written test, a shortlisted candidates would have to attend the physical test during the months of 2014 December – February 2015. It means that, after the declaration of the preliminary exam results, selected candidates will get only a couple of month's time for mental and physical preparations. As the physical test includes 100 Metres run, high jump, long jump and various other activities, it is very important to undergo training along with the preliminary test.

Candidates can make a special food menu for a 6 months period after discussing with dieticians or doctors. Taking with positive thinkers will boost the self confidence level. Including vegetables & fresh water can decrease your eyestrain and sharpen the memory while it will give more concentration inside the exam hall. Reducing fretfulness and covetousness would give a thrilling experience which can convert your dream to accomplishment.

Kerala PSC police sub inspector 2014 hall tickets for Trainee (General Executive Branch) exam will be available from the Kerala PSC website from 19th July. The exam is scheduled to be conducted on 2nd August 2014 Saturday from 1.30 PM to 3.15 PM. The preliminarily test consists of an objective type exam (OMR Valuation) based on the qualification prescribed for the post. Read more to know about the syllabus and exam details of Kerala PSC police sub inspector 2014 exam.