Rashtra Deepika Cinema 5th July 2014 issue is now in stands. The highlights of this issue will be the cover story on the current status of Malayalam Film industry in the past six months. While analyzing the performance of those films released in the first half of 2014, the report are truly disturbing. Considering the released movies, the number has gone past the previous year. But the pathetic performance of many movies shows the real picture of the industry. Even though 91 movies reached theatres in 6 months time, only 6 among them could only satisfy the viewers. 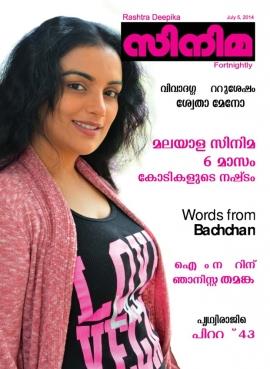 It is also understood that the malayalam film industry had been undergoing a tougher time losing crores of rupees. The article would give an insight to the reading community about the present situation of the film world. Interviews with Thamanna, Shweta Menon, Amitabh Bachchan are other major features of this issue. Popular South Indian actress shares her thoughts and views about filmy career and her future plans.

Shweta Menon who is back to acting with 'Dhanayathra' is excited to get featured in a movie which has much scope for acting. She talks to the readers about her acting career and family. Being a loving mother of little Sabina, Swetha Menon is excited to share her thoughts about her daughter. Legendary actor Amitabh Bachchan is on the hot seat sharing his good moment with the readers.

The cine bits of bollywood and tollywood can make the fan followers to know about their favourite star's upcoming movies and its release in Kerala. Location coverage on upcoming movies inform people about inform the people behind the curtain preparation. As a highly energetic team of youngsters accelerate themselves to bring the best reading content, this issue too is thickly packed with attractive features and photographs which can keep the readers intact.