Mahilaratnam, one of the most popular women magazine in Kerala has published the July 2014 issue. Like its previous issues, the current edition of Mahilaratnam is packed with interesting articles and photo gallery. The highlights of the July issue are exclusive photo shoot and interview with actor Rahman and family, Ramzan tastes, different types of blowses and a lot of reports on cookery, fashion and vasthu. 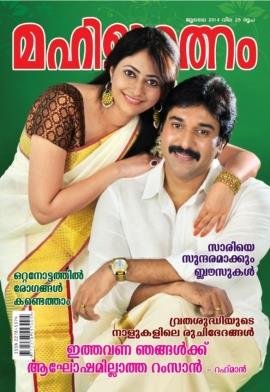 Actor Rahman who has a successful acting career speaks about his filmy career and family. Being a caring husband and a loving father, Rahman who has created his own space in the industry shares his thoughts and views with the reading community. As a person, he is well supported by his wife Mehrunnisa. Rushda and Alisha, the two daughters of Rahman and Mehrunnisa are much close to their parents. Rahman will be soon be a part of 'Blue', a movie which tells the tale of a struggling filmmaker.

Being the Ramzan time, various recipes prepared by experts would keep the interest high for the readers. Ramzan being the greatest religious observance in Islam is well observed by the people around the world. As special food habit is prescribed for the period, an incomparable foodstuff is being arranged for the people. The recipes can be used to prepare well balanced food. Other highly impressive articles on cookery, fashion and vasthu would keep the readers intact.

Novel thoughts on fashion trends will give awareness to the youngsters who keep an eye on the global scenario developments. Being a much talked monthly magazine, Mahilaratnam has influenced much on the life of women of the present generation. Catering the diversified interests of women of all age groups, the July issue of the magazine also features regular columns on cuisine, beautification, dress, health, housekeeping and gardening.

As a magazine which reaches the heart of the house-wife directly, it is aimed at the well educated women who wish to update themselves about the changing world. Coming at an affordable price tag, Mahilaratnam is designed for the women of the present generation.