India Today Malayalam, one of the leading news weekly has published the 30 July 2014. The highlights of this edition include exclusive interview with Chief Minister Oommen Chandy, the ascension of Amit Shah as BJP president, controversial meeting between Ved Prathap Vaidik and Hafis Muhammed Said. and many other stories are also featured in this issue. 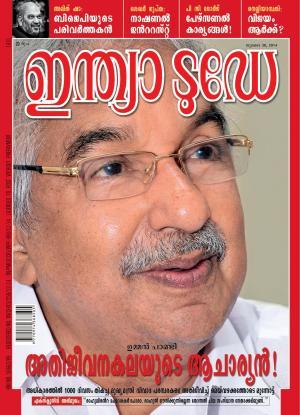 In an exclusive talk with India Today Kerala chief minister Oommen Chandy reveals about the reshuffle and he had once promised K B Ganesh Kumar to reinstate once the case regarding him gets settled. He also blames the advisors of Rahul Gandhi, who have misguided Rahul on some matters which gave a tragic end to the UPA government and Congress party.

The ascension of Amit Shah as BJP president is seen as the most captivating change that happened in the party. It is also the final sign of the Narenda Modi's expansion of power over all matters. The big story of this issue discusses on how the crowning of Shah as the BJP president would change the fortunes of the party. Being the youngest of BJP presidents, Shah is in good terms with the RSS.

An investigative story on the disputes on controversial Karuna estate on Nelliyampathi is featured in this edition. The highly controversial meeting between Ved Prathap Vaidik and Hafis Muhammed Said is featured as a notable story. Nomophobia, a newly emerging mental problem which is caused by mobile phones is discussed here as a thought-provoking report. It is also estimated that, as India becomes more mobile dense, more teenagers fall as victim to this particular mental problem.

As Germany lifts Fifa world cup in 2014, it is the testimony of their unity as a nation despite having a horrifying past. In another important story, the present state of Sai Baba's empire in Puttaparthi and how it is managed by Sri Sathya Sai Central Trust (SSSCT) are discussed. Writer Nadine Gordimer, actor Sohra Sehgal and Malayalam director Shashikumar are remembered in the 30th July issue.

India Today Malayalam being one of the leading national news magazines in Kerala delivers trustworthiness, incisiveness and authority to readers. So, make use of this issue to know about the inside stories of the previous week.