Malayala Manorama Weekly which has played a key role in developing the reading habit among the people has published the 9th August 2014 issue. Being one of the largest circulated weekly magazine in India, the current issue contain various interesting stories. The highlights of this issue are interview with actress Muktha and travelogue of A P Abdullakutty MLA. The cover story of the current issue is based on the dare steps taken by the Muslim women to climb coconut trees. 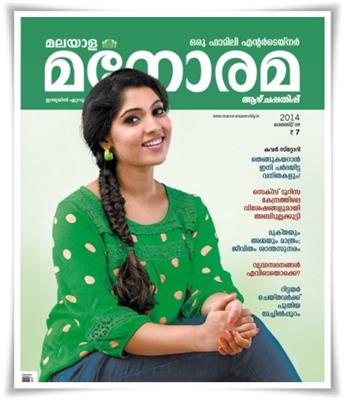 Cine actress Muktha shares her dreams and thoughts on her acting career while sitting in her new home. Known as an actress and entrepreneur, Muktha shares her story with the readers living a happy life with her mother. The cover story focuses on the dare attempts put forward by a group of muslim women to learn the art of climbing coconut trees. As the spices research centres are taking initiative to empower women through training in coconut plucking many have found it as a job and earning for their home.

Some glimpses of the travelogue, 'Marakkanavatha Macau Yathra' written by Kannur MLA A P Abdullakutty would serve as a delicious dish for the readers. Through an article he shares his experience visiting a land which is much popular for tourist attraction. An interesting article for the people who find hard to spend their time after retirement has been featured in the current issue. Other than the above mentioned topics, regular columns would make this issue more exciting to read.

Other features like serialized novels, Cartoons, Jokes, utility columns, stories for children, cinema section, comedy sections, recipe sections and short stories would give a real time reading experience. Astrological predictions, poems, kids sections will give full satisfaction to the readers. Having a circulation of more than 6 lakh prints, Manorama Weekly is seen as a companion for people of all ages. Creamed with creative content, this magazine gives refreshment from top to bottom.

This weekly is highly recommended to passionate readers who wish to keep themselves happy all day.

Malayala Manorama Weekly July 5 2014 is now in stands. To read the latest issue of Malayala Manorama Weekly dated 5 July 2014 online, do check the website or buy a copy from your local book vendor. The highlight of this issue would be the interview with producer Suresh Kumar and wife actress Menaka. Other than regular columns, Pranayathira by Harikrishnan would make this issue delicious.