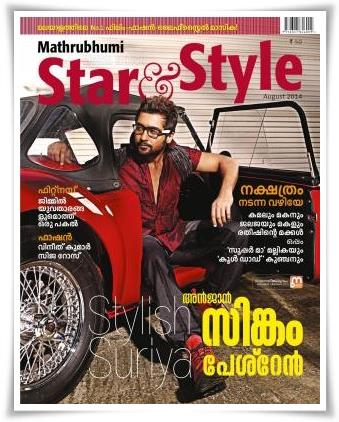 In the youth fitness section, youngsters like Vinu Mohan, Anu Mohan, Tovino Thomas and Unni Mukundan are featured. The body contours section is blessed with the presence of Vineethkumar. If you are ardent or passionate follower of 'Star & Style' magazine, the current issue will completely entertainer you.

'Star & Style', one of the most popular entertainment magazine housed by Mathrubhumi has published is August 2014 issue. Like its previous editions, this issue of 'Star & Style' is highly packed with exciting articles and colourfull photographs which could keep the readers intact. The magazine with cover page featuring actor Suriya has a high voltage storage capacity of holding attractive news and exclusive photo shoot of celebrities. Touted as No 1 film and style magazine in malayalam, the content of Star & Style' is much enough to substantiate the remarks.

The major highlight of this issue is an exclusive article featuring youth icons Unni Mikudnan, Tovino Thomas, Vinu Mohan, Anu Mohan and script writer Sethu. These youngsters spend a day together for a chit chat at Kochi Kata Mount Gym. It was Unni Mukundan who initiated to bring all the actors together. All of them share their thoughts an views about the changing body fitness techniques adopted by the present generation. Unni who had been following a tight physic and food habit has his own concept about keeping healthy. The talk would truly make the readers to find values which could be followed in their life too.

Mallika Sukumaran, the mother of actors Prithviraj and Indrajith who has contributed a lot for lifting the career of her sons shares about her triumph in business set in Kerala and Qatar. The suave lady is running a beauty clinic and skin clinic along with good friend Sheila Philip in Qatar. She also has an Indian Cuisine Restaurant that focus on Kerala food. The small scale business ventures of Mallika won the heart of many people which made her to concentrate more on business rather than acting.

In 'Gurumughangal', a column handled by actor Mohanlal, he tells about his life experience with late actress Sukumari. He shares his decade's long relationship with the actress who had given to life as his mother is several movies. This heart touching article would leave the readers with tears.

So the 'Star and Style' which has already clinched the hearts of millions of malayali readers will be very special for this August too. As the magazine focuses on film and fashion trends, its inventive approach in delivering content is well praised by the readers. The other regular features of this issue include Box Office, Cine News, Marumozhi, Star Jam, New Releases and Star Net. This magazine can truly fit the bill for all those who are interested in knowing the latest trends from the malayalam film industry. So don't miss the current edition of the 'Star & Style' magazine.