Mathrubhumi Arogyamasika, one of the prominent health magazine among the malayalies hs published its September 2014 issue. The current edition of the magazine is packed with informative articles and news which would deliver the best for the reading community. 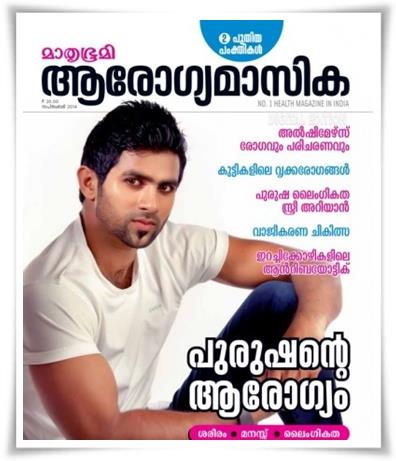 This edition gives special focus on Health of Men. Alzheimer's disease and its management, Kidney diseases in children, Antibiotics in Chicken are also given with prominence. Articles on weight loss, health plus, emergency care and green kitchen finds its place in this issue.

The article on 'Alzheimer's disease and its management' gives an insight into the nursing of people who are under treatment. It is very important to take care of the people who are suffering from Alzheimer's disease. As the mode and behaviour of the people changes, they may become highly distractible, talkative, apathetic, anxious, agitated or might display wandering behaviour. While nursing the patient, one need to be more patient and use different strategies to keep them happy. A well written article on 'Alzheimer's' and it management given in the magazine will surely be worth while taking care of the patients.

An exclusive article on 'Robotic Surgery' is given with more significance. Robotically-assisted surgery is widely used around the world to perform complicated surgeries. Being a scientifically researched article, it zooms into the importance of using robotic systems to aid in surgical procedures. Robotic Surgery' is making its way to heal patients through hospitals in Kerala. It would be a gigantic step to develop the health care system in the state.

An article titled 'Super Food for Men' gives guidance to following a proper food habit. A list of food which could give more energy and power is being described in it. Use of antibiotics in chicken had been reported in the state which truly had become a hot discussion during the past few weeks. It is reported that the misuse and overuse of antibiotics in chicken lead to the emergence of antibiotic-resistant bacteria in the chicken itself which get transmitted to human. An inclusive article on the real facts behind the antibiotics and chicken will make the readers understand more on the use and misuse of this chemical.

Manorama Arogyam magazine September 2014 issue is now in stands. As Manorama Arogyam September 2014 issue free online reading is not possible, you need to buy a copy from the nearest book vendor to read the content. The highlights of this edition are articles on Women's secret diseases, roof top farming, Special focus on Cholostrol = Heart Attack. Find the some interesting articles on health and related topics in the current issue of Arogyam.

Sampadyam magazine September 2014 issue has been published and now is available for sale. This edition of the magazine covers topics including various ways to get more interests and methods to save income tax. Regular features like Side Business, Finance Doctor, Happy Life and Money Manthra keep the reading much interesting. Read more to know about Sampadyam, the most celebrated investments and financial planning magazine.