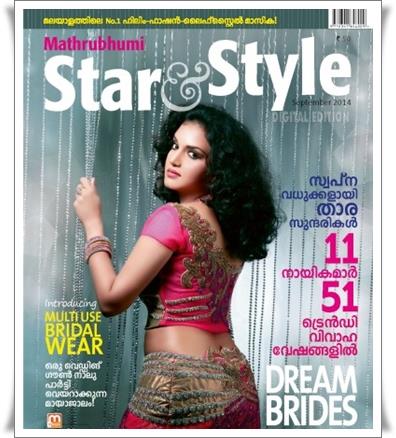 Touted as No 1 film and style magazine in malayalam, the content of 'Star & Style' is adequate to prove the remarks. As the current edition is coming during the Onam season, the editors have tried their best to include interesting articles and photographs. The multiuse bridal wear which can be used as part wears is being introduced before the readers.

September 2014 issue of 'Star & Style' comes with marriage reception photographs of Fahadh Faasil and Nazriya Nazim. The splendid reception held for the family and friends from film industry was a star studded event. It was also a huge get-together for the Malayalam film industry with all major and popular stars making their presence at the connubial.

All gathered who gathered there to bless the newly married couple who are also much favourite among the moviegoers. Mammootty, Balachandra Menon, Aashiq Abu and Rima Kallingal, were among a few in the industry who attended the reception. Nazriya donned a specially designed lehenga choli while Fahadh was spotted in black velvet jacket with trousers.

Young and upcoming actresses like Honey Rose, Jyothikrishna, Roma, Sanusha, Anumol, Ansiba Hassan, Samskrithi Shenoy, Sanjana, Mariya, Sarayu and Apoorva Bose are dressed up in trendy bridal costumes. 'Star and Style' which has already won the hearts of millions of malayali readers would be much special for this Onam too. As the magazine focuses on film and fashion trends, an inventive approach in delivering best content is well praised by celebrities and normal reading community. The other regular features of this issue include Box Office, Cine News, Marumozhi, Star Jam, New Releases and Star Net.

This magazine would suit the interest of youngsters who update themselves on the latest trends in the moving world. Don't miss the current edition of the 'Star & Style' magazine which would be more special for you.