Aranmula is a unique place in Kerala while considering its historical and cultural importance. The Aranmula Boat Race, being the oldest river boat fiesta in Kerala is held annually on the Uthrittathi asterism during the Onam festival. More than being a race, the Aranmula Uthrittathi boat race is considered more of a ritual with a blend of rich tradition and customs immersed in grandeur. 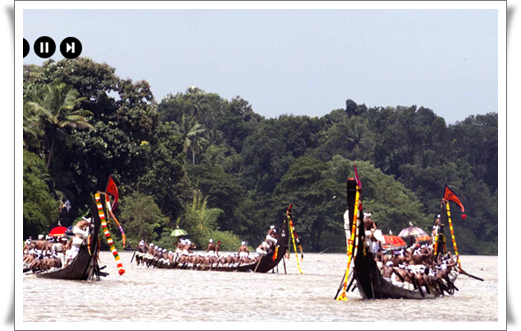 The grand Boat Race takes place at Aranmula, near a Hindu temple which is dedicated to Lord Krishna and Arjuna. In 2014, the event is being held on 10th September. Added in 1972, the snake boar race is an important program which adds more colours to the festival. The event is being witnessed by thousands of people encouraging the snake boats.

In the beginning, the snake boats move in pairs according to the rhythm of songs and shouting of the exciting crowd gathered there. The oarsmen sing traditional boat songs and wear white mundu and turbans giving a traditional look to their appearance. This year 51 palliyodams will take part in the boat race and the feast.

Palliyodams are Aranmula's unique snake boats which belong to different 'karas' (rustic parts) on the banks of river Pampa. Each Palliyodam will have 4 helmsmen, rowers and singers. The head of the boat will be decorated with a golden lace, a flag and two or three ornamental umbrellas at the center as a show of pageantry too.

According to legend, a devout Brahmin who vowed to offer all the requirements for the Thiruvona sadya at the Aranmula Parthasarathy Temple was attacked by enemies. To protect the Thiruvona Thoni which came with offering to the Lord, people from nearby areas sent their snake boats. Later, this became a practice and eventually became popular as the Aranmula Boat Race. Aranmula is about 117 km from Trivandrum International Airport while people can reach the place from Chengannur, the nearest railway station which is just 11 kms from Aranmula.

Aranmula Vallamkali and Vallasadhya are being enjoyed by thousands of people. All arrangements are being made to telecast and webcast the event live. The heats and final of Aranmula Vallamkali 2014 will be reported on Asianet News, Kaiali TV, Manorama News, India Vision, Mathrubhumi News, DD Malayalam, Reporter TV, TV New and Amritha TV. Much interestingly, the Aranmula Vallamkali can be viewed from 9 AM onwards on 10th September 2014 through www.aranmulavallamkali.in/live-streaming.php.