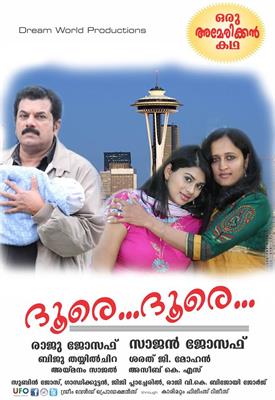 Raju Joseph, better known as the director of movies like 'Dollar' and 'Niyogam' is getting ready with his next venture. This time, he dons the role of a producer for the movie 'Doore 'Doore' helmed by his disciple Sajan Joseph. Set in United States of America, the movie zooms into the life of a young man named Biju and his wife. Even though being members of a big family in USA, the couples lead an incomplete life as they don't have a child to add more happiness.

Biju gets support of his friend, a doctor played by Mukesh. He takes advice for the doctor regarding the need of a surrogate mother to bear his child. Later his uncle brings a girl named Aagi who was ready to undertake the service. Aagi had a awful past and her family got shattered due to some unavoidable incidents. Aagi's sister Annie was in love with Arun and both left home to get married.

Due to an uncountable happening, Annie lost her life. Arun lost his temper and wanted to find the culprits who were behind the murder of his lover. Meanwhile, Aagi had to spend some terrible days in USA. How she tackles the issues forms the crux of the movie. Aagi, Premkumar, Josekutty, Biju Thayyil Chira, Karthik, Karthikeyan, Manka Mahesh and Aishwarya will give life to other prominent characters in the movie.

The movie is produced by Raju Joseph and Biju Thayyil under the banner Dream World Productions. Completely shot in USA, 'Doore' Doore' will be a visual delight for the moviegoers. The movie is expected to reach theatres in February 2015. Raju Joseph has recently cashed for 'Solar Swapnam' and also directed the movie 'Under the Sky'. Mukesh is having a good time in the malayalam film industry. He will also be seen in a couple of upcoming ventures including '1000' and Siddiqe's 'King Liar'.