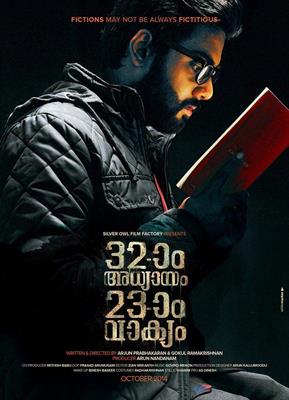 Govind Padmasoorya, the darling of Malayalam TV audience is gearing up to don the lead role in a suspense thriller helmed by director duo Arjun Prabhakaran & Gokul Ramakrishan. Titled '32aam Adhyayam 23aam Vaakyam', the movie will feature the young actor in two different looks. Miya George has also been roped to play the lead lady in the movie.

Even though, Govind was offered with a lot of scripts in the past months, he was looking for a strong and interesting role as a hero. As wished to be a part of good films, Govind has been very cautious and choosy regarding taking lead roles. As the script of '32aam Adhyayam 23aam Vaakyam' had a soul, Govind decided to take up the project. The first half of the movie is set in the romantic mood which will transform into the suspense mood in the second half giving a thrilling experience to the viewers.

Lal, P. Balachandran, Sunil Sugatha and Shashi Kalinga will give life to other prominent characters. 32aam Adhyayam 23aam Vaakyam will be produced by Arun Nandanam under the banner Silver Owl Film Factory. The music department will be safe in the hands of Govind Menon while Prasad Arumugam helms the camera. Earlier, Padmasoorya and Miya paired up for the movie '8-1/4 second'. '32aam Adhyayam 23aam Vaakyam' will go on floors by January 26 in Ernakulam.

By the way, Govind has also committed a multilingual movie 'Hello Ajnabee' directed by Vinil Vasu. 'Hello Ajnabee' is a tragic love story of a couple who could not meet each other when they desired the most. Even though, Govind is known as a big screen actor, his popularity rose to the peak as the host of 'D4 Dance'. He is well liked by the small screen spectators for his witty anchoring and overall involvement in the show.