Television spectators around the world would be getting hours of entertainment as their favourite film stars deliver their majestic performances before a thick packed audience of about 20,000. The 17th edition of Asianet Film Awards ceremony will be a show of dance and music creamed with fun and humour. Instituted to honour both artistic and technical excellence in the Malayalam language film industry, this award function has gained in popularity over the years. It is currently one of the most-watched award ceremonies in Kerala television. 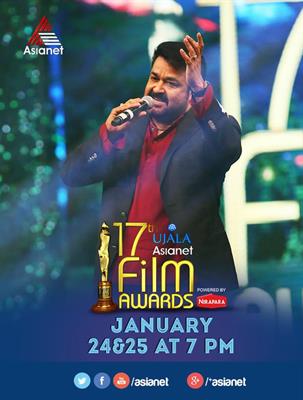 The event was held at Willington Island, Kochi on 11th January 2015. Ujala is the branding sponsor, which the event has been powered by Nirapara and co-presented by Swarnam Nalleanna and Muthoot Mini. The co-sponsors of the show include Henko, Exo, Maxo, Bhima Jewellers, Joy Alukkas, Josco Jewellers and Libero.

The gala function which include dance, singing and comedy skits featuring celebrated actors from South Indian film industry will purely deliver a visual delight for the spectators. The 17th Asianet Film awards event will be telecasting on 24th &25th January 2015 at 7 PM. So tune into Asianet and enjoy the magical treat offered by the stars on earth.