Mahatma Gandhi University, Kottayam has invited application for admission to UG Degree courses for the academic year 2015-16 in the affiliated Arts & Science/Constituent Colleges of the University. The application process is opened for those students who have completed their plus two course. Initiated during the academic year 2010-2011, the admission process for the University is done through the Centralised Allotment Process (CAP) which enables the applicants to submit only one application online for admission to any number of Colleges/Programmes.

Much importantly, applicants can track the status of their applications from time to time during the admission process. This internet based single window system is intended to give allotments to the various academic programmes offered by the Mahatma University Departments and affiliated colleges. The simplicity and transparency in CAP would enable the candidate to choose courses according to his/her interest. 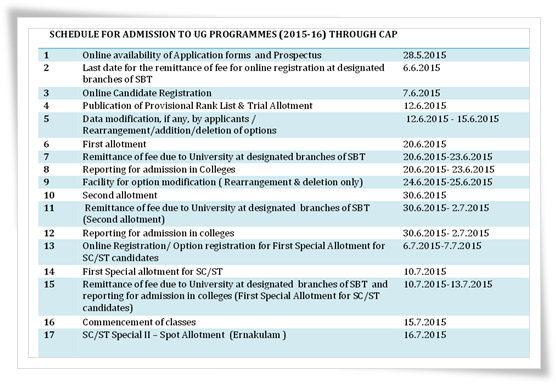 MG University CAP UG 2015 – Important Dates
The Kerala Plus Two and VHSE exam results 2015 will be published on 21st May 2015. Candidates who wish to pursue their higher education from M G University can download the prospectus from the official website from 28th May 2015. The Centralized Allotment Process is aimed at candidates to apply for Government, Aided and Unaided and Constituent colleges run by M G University.

Students who had completed their higher secondary education can apply for the under graduate programmes which are being offered by the Mahatma Gandhi University. After entering the website, students need to enter the login Panel in MGU CAP Web Portal. Using the application number and password, one can activate the account. The application form along with personal details, academic eligibility and the options should be submitted. Application can be submitted by visiting the official website of the M G University http://www.cap.mgu.ac.in/

MG University CAP 2015 allotment schedule has been published. As per the schedule, the provisional rank list and trial allot is schedule to publish on 12th June 2015, while first allotment will be published on 20th June 2015 at www.cap.mgu.in, official website of CAP. The allotment timetable will guide the students and parents to know the important dates regarding the 2015 CAP admission process. Scroll down to know about the MG University CAP 2015 allotment schedule.