M G Radhakrishnan is no more 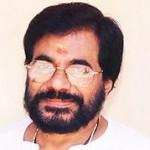 The South Indian noted music director M G Radhakrishnan was died recently. He was facing some problems with liver and died from the hospital at 1.45 pm today(02 July 2010). He was the elder brother of singer M G Sreekumar.

He was born on 1937 at Harippad. Before coming to the film world, he was working for the Akashavani radio station. He had a very good time there. His first film was 'Kallichellamma', where he came as a singer. His introduction to film as music director started with Malayalam film 'Thampu', directed by Aravindan.

The music director was hopitalised in for the last seven days. And everybody thought he would recover from it as it happened previously. But that miracle didn't happen here.