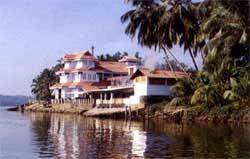 About Sree Muthappan Temple in Parassinikadavu

Sree Mutthappan Temple is well known here in the two districts Kannur and Kasaragod of Kerala, Devotees come visiting the temple from all over Kerala, as it is believed that he can cure all diseases and give prosperity to the devotees. Sree Muthappan temple is the only temple in Kerala, where Theyyam performance is a daily offering. There are many Muthappan temples in the area showing the popularity of the God Muthappan.
Muthappan is said to be the manifestation of Lords Shiva and Vishnu and so represents the idea of Brahman, the unity of God as expressed inthe Vedas.

One Story behind the Sree Muthappan Temple

Muthappan , as a boy, was a very rebellious one. Hunted animals, killed and skinned them, wore their skins as clothes. He climbed a coconut tree and emptied the contents of the toddy jar where Toddy was being tapped, when the Toddy tapper saw him and challenged Muthappan. Muthappan got angry and changed the man into a stone.
Even now when performing Muthappan Theyyam, the performer consumes Toddy and even passes the jar along the viewers. In the Muthappan temples toddy drinking is accepted as Muthappan himself has broken the rules by allowing toddy in to the temple premises. The rituals of the temple are done by the Thiyya community of the northern parts of Kerala.
There is no idol worship at the templebut only the ritual performance which enacts Muthappan Theyyam at the parassinikadavu temple. Fish is used as the offering to Muthappan and anyone can enter the temple irrespective of caste creed or religion.

Another Story of the Parassinikdavu Muthappan Temple

The Naaduvazhi of the Ayyankara Illathu was a sad person as there was no child in the family. His wife Padikutty antharjanam was a devotee of Lord Shiva, prayed and got a boon. She dreamt about Lord Shiva and then found a baby on the flower bed while she was coming from her bath. They lovingly accepted the child to be given by Lord Shiva and brought him up.
But the child was not a normal one, he used to go the jungle nearby , hunting with his bow and arrows and feeding the poor and the backward communtities. These were unknown in the namboodiri families of those days. The boy would not listen to his parents and continued his service to the poor. Oneday the boy revealed his divine form to his parents and then started a journey when Kunnathur attracted and detained him.

He started stealing toddy from the palm trees of Chandan, a toddy tapper in Kunnathur. Chandan saw an old man sitting on top of the palm tree and drinking toddy.
He tried to shoot the old man with his bow and arrow but fell unconscious before he even tried. Chandan's wife came looking for her husband found him lying there. She also sat the old man sitting up in the palms.
Sha called out to him as Muthappa / Mootha appa ( grand pa ) and asked him to save her husband. She earnestly prayed to God and Chandan regained consciousness. The lady offered boiled grams, slices of coconut, roasted fish and toddy to the Muthappan. As per their request he accepted to stay in Kunnathur and that is the famous Kunnathur Padi.
After sometime Sree Muthappan shot an arrow upward from Kunnathur and it seems to have reached Parassinikadavu. where the temple stands today. The arrow was found glowing in the theertha near the temple. This arrow is placed on the altar of the temple and from then it isbelieved that Sree Muthappan is residing at Parassinikadavu.

You can always find dogs running about in Parassinikadavu. It is believed that Muthappan was always accompanied by a dog and of the dogs is presented with with the offering of the day. It is also said that once the temple authorities wanted to reduce the number of dogs running around in the temple. They took the doggs and the puppies away from the temple. From that time the Theyyam performer coud not perform Theyyam as the God would not enter the performer's body. Only after the dogs were brought back the performances continued as usual.

Mammiyoor Temple, situated near Guruvayoor Temple is one among the most widely visited pilgrim centres in Kerala. This temple dedicated for Lord Shiva in rowdra bhavam attract lots of believers from all over the world. Thiruvathira and Shivarathri are two famous festivals celebrated in this Shiv temple. Fantastic sculptors and ancient mural paintings captures all eyes of tourists.