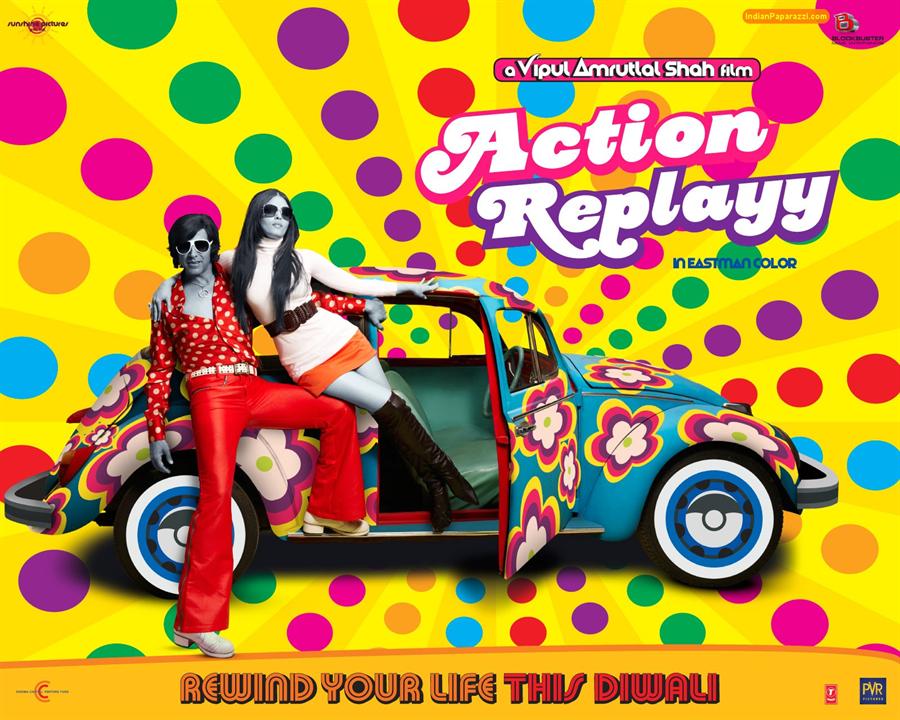 The film cannot be considered as a hit film, released in dewali of 2010, rather it is considered as a flop film. Since the last year, Akshay Kumar's films doesn't finds good response from audience. The reasons for the flop of this film is that it lacks a good screenplay, even though the film's story is not bad. The box office collection of Action Replay is just more than 27.5 crore Indian Rupees.

The story goes like this. Bunty ( Aditya) gets irritated by witnessing the daily fights of his father, Kishen (Akshay Kumar) and Malla(Aiswarya Rai Bachan) . He gets feared about marriage and say no to his girl friend. But his girl friend takes him to her grandfather (Randhir Kapoor) who was a scientist who created a time machine. So Bunty uses this time machine and goes to past and plays a role of cupid in making a lovable future to his his father and mother.

Since the story goes to an old age, director has succeed in creating an old eighty's Mumbai city.But the story lacks a good screenplay which made many audience away from this huge star- casted film. The story leaves audience with many questions like how Bunty's parents got married at first? etc. Their is a role of Neha Dupia, who loves Buddy in past, fails even to recognize him in future? After all it leaves a question is it possible that one can change future just like this?

The film is filled with good punchy comedy scenes, seeing Akshay Kumar and Aiswarya Rai Bachan in old retro look make people laugh out in theaters. Akshay Kumar's role is a person who is wrose in confidence and brave. But Aiswarya's role comes with great brave and confidence. Film promos failed to signify the story backup of film which made audience away in deewali holidays from theaters. Those promos failed to create a good perception among the viewers.

Songs are very good, two of them had already been a hit, " Zorka Jatka" and " Beekabar". Aiswarya Rai Bachan looks great in the film throughout from beginning, till the end. You watch this film and kindly add your comments below. You can watch the same film in Kerala theaters also in diwali weeks. Salute to Akshay Kumar's acting skills.


Even though the title of film says Action Replay, there is nothing like actions to be replayed in the film....!

I am sorry to say that the blog aiswaryaraihoneymoon.blogspot.com
has been removed.