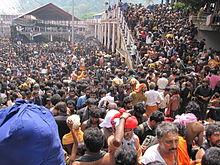 Today, The division Bench of Kerala High court has sought a report from the Kerala Government on the Shabarimala Stampede. The division bench also asked the Director general of Police and the Devaswom Board to file a report based on this. The Shabarimala tragedy at Pullumedu is the second largest stampede in Kerala History in which over a hundred pilgrims died and over 50 were injured. At the same time, six more bodies of the pilgrims victims identified and now three more bodies unidentified at the Ernakulam General Hospital mortuary.