Today We are celebrating the 62 nd Republic Day of our Country. On this Occasion, I extend my good wishes to all of you. For the past six decades we have been a democratic republic guided by the principles of justice, liberty, equality and fraternity. 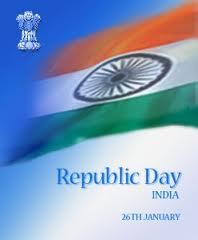 We have obtained independence on 15th August 1947; But India did not have a permanent Constitution until on 26th January 1950. During the period India was a dominion with King George VI as the head of the state and Earl Mountbatten & C. Rajagopalachari served as the Governors-General of India. On 26th January 1950, Rajendra Prasad was elected as the first president of India and also in the same day, India declared itself as a "Republic" thereafter 26th January celebrated annually as Republic Day in India. The Indian National Congress and other parties had been celebrating 26th January as the symbol of Independence. 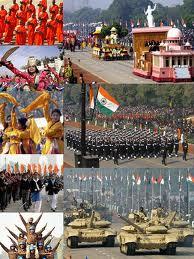 Now India has become a largest democratic country in the world. Even if we have a independent nation and a ideal democracy, it does not ensure the complete peace. The Recent terrorist attack in different cities in our country reveals the truth. Many of innocent lives of our brothers and sisters were lost in the well planned attacks in Mumbai. So everyone stand together and we have to fight against these devilish forces. Proud to be an Indian.

India is a young nation as the democratic point of view and our valuable youth are the asset of our nation. So friends, we have to develop our own skills and work for the welfare of humanity also. Make high performances in your own area like academics, sports , Arts etc. That will be beneficial to our nation also. For such success all of us have to play our own part properly. Gandhiji used to emphasize that " It is in this spirit that each one of us should act."
Unemployment , Poverty, illiteracy are the major factors that pulls down our country from mainstream. We have huge population without basic necessities of life. I think this may be the basic thing standing against the development. Now Our Information Technology is booming better and that will be reduce the unemployment threat. Technology plays an important role in the development of the country. Communication systems hold a vital role. Our Scientist are researching in various fields. The launch of Chandrayaan-I has made every Indian proud. Latest Technology should be used to counter terrorist threats to the nation. Our Government have made foreign relations to promote peace and development of our country.
Let me conclude here with a warm wishes and also together we take a pledge to bring glory to India.
JAI HIND!

Our nation celebrates its 65th Republic Day on the 26th January 2013.This speech is prepared to help students for using it in the Repubic day function.