Difference between Makara Jyothi and Makaravilakku 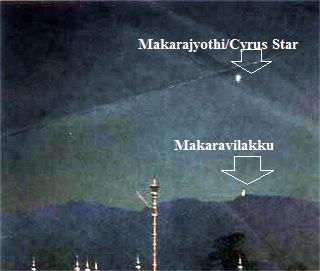 Several responsible authorities including Devaswam board and thanthri Rahul Easwar clarified Makaravilakku is man made, but it is a matter of faith.

Makaravilakku, is a part of a religious ritual that is practised by the tribes in the forest of Ponnambalamedu(the place where Makaravilakku appears). There is nothing inhuman in the Makaravilakku,, no God or goddess is performing this. It has been a practise for more than 100's of year by the tribes. Actually there is a temple in the Ponnambalamedu, the place is not open to the public it is under the control of Forest department of Kerala. When the Cyrus star appears in the sky on Makaram 1st, these tribes too perform their rituals in that temple. Like in the temple of Sabarimaal they also perform Arathi encircling the fire around the Idol. It is performed by lighting camphor and ghee in a vessel and is circled around the idol 3 times. This lamp or fire is what we see from the Sabarimalai temple and call it Makara Jyothi but the fire in the Ponnabalamedu is the actual Makaravilakku

Makarajyothi: The Cyrus Star
Makaravilakku: The Arathi that performed by The tribes

It was about 25 years ago rationalist (Yukthi vadhi sangam) Kerala set out to prove the truth behind the Makara Jyothi and Makaravilakku, they claimed that that saw police assisted with the KSEB official is lighting the Makaravilakku. They filed an affidavit before the commission that was enquiring about this in 1999 to visit the Ponambalamedu and to find the truth but the plea was rejected by the high court in same year.

According to them it is this misconception about Makara Jyothi and Makaravilakku is the reason why the disaster happened. They accuse that the devotees from outer Kerala believed Makaravilakku as something done by God, which is a miracle and that is why the people are gathering in places like Pullumedu to see the Makaravilakku not Makrajyothi. You can see Makara Jyothi sitting any were since it is the star that appear in the Sky.

Since Devaswam board has made the differences clear and presented the facts, it is the responsibility of everyone to respect the faith. The government of Kerala should take every possible to steps to ensure the safety of the devotees and avoid such tragedies in future.

The Makaravilakku festival in Sabarimala is now in the eye of a storm. The recent mishap at Pullumedu near Sabarimala involving Sabarimala pilgrims has raised an outcry in the media.

Nice article. Clearly you depicted what the subject mattered. The importance of these type of articles are very much needed on these days, hope SPK will get more resources like this from the reputed members.

I think there is no point in investigating the issue, the thing is that it is a mater of belief and symbolism, you cant make proofs for this. How Jesus Christ was born, it is symbolism of divinity. How can you ask for scientific proof of Christ's birth.

CM has commented wisely on this issue,