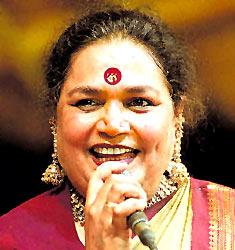 Usha Uthup or Deedi as she referred to, is a famous Indian Pop Singer. Usha Uthup is the first person to have brought pop culture in India. Recently, Usha Uthup honoured by the nation by giving Padma Shri which is the fourth highest civilian award from Government of India. She has sung in more than 15 Indian languages including Bengali, Hindi, Punjabi, Assamese, Oriya, Gujarati, Marathi, Konkani, Malayalam, Kannada, Tamil, Tulu and Telugu. She is the only female person from India , singing in foreign languages like English, Dutch, French, German, Italian, Sinhalese, Swahili, Russian, Nepalese, Arabic, Creole, Zulu, and Spanish.

Usha Uthup was born on November 8, 1947 in Madras(Chennai). Her father Sami Iyer was the police commissioner of Mumbai. She has three sisters (Uma Pocha, Indira Moni and Maya Sami), all of whom are singers. She also has two brothers. Formerly, she was not learning music, but grew up in an atmosphere of music. She, along with her parents used to listen Carnatic and Hindustani classical music on radio. This helped her to reach in the heights of Indian Pop music. She started her professinal career in the 1970's.

Usha Uthup started her professional career at the age of 20 by singing in night clubs in Chennai and Calcutta. After that, she had got an offer to sing a song 'Dum Maro Dum' in the film Hare Rama Hare Krishna. She has sung many songs for R D Burman and Bappi Lahiri like 'Shaan se', 'Don't worry Kolkata', 'One Two Cha Cha Cha', 'Hari Om Hari', 'Ramba Ho Ho', all were major hits .From then on, she has sung and popularised in many languages with her sizzling voice. She enthralls listeners with her songs and charms audiences in concert venues even today. She is also a popular stage performer with a very good fans all ovber the world. She has got several awards over the years like Rajiv Gandhi Purashkar for National Integration for quality music, Mahila Shiromoni Purashkar for international peace, and Channel [V] award for outstanding achievement. She is also a social worker and sings for many charitable causes like The Red Cross, SPASTIC society of India, Mother Teresa related charities, cancer institutes, schools for the blind, old aged homes, government charity drives and various drought and flood relief funds. More over, she has also worked frequently and significantly for service organizations like the Rotary, Lions, Jaycees, Giants, and SPCA etc. in National and International levels. She has sung for Prime Ministers and Presidents alike. Dignitaries like Indira Gandhi, Jomo Kenyatta, Daniel Arap Moi and Nelson Mandela have all been her admirers.

Here are some of the famous songs from her along with Movie Name and release year. 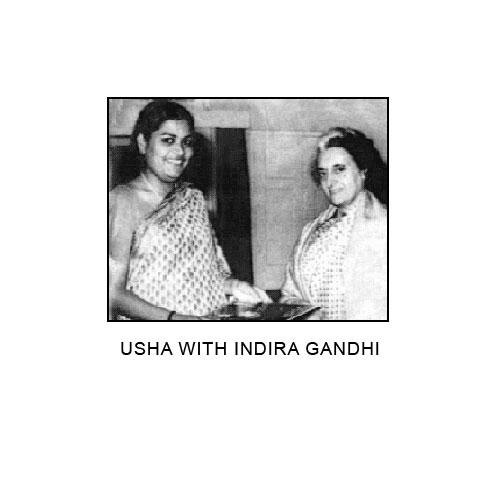 With her good acting talent, she also proved to be a good actress. We saw her in many Indian films and musical albums with amazing performances. Her acting in Malayalam film Pothenvava is appreciated by everyone. In this film, she was acted as Kurisuveettil Mariamma, the mother of Megastar Mammootty. In 1972, she appeared as a cameo in the movie Bombay To Goa with Amitabh Bachchan and Shatrughan Sinha.S he appeared in many films as herself including Bow Barracks Forever and Musical album Hattrick. In 2010, she appeared in Manmadhan Ambu, as the mother of R Madhavan.

Apart from films, she also appeared in many television shows. In Indian Idol 1 and 2, she appeared in disguise. She was one of the co-judges of the Idea Star Singer reality show in Malayalam. The latest news is that she supposed to be acted in Vishal Bhardwaj's 7 Khoon Maaf as a maid. The film will also have a song from her.

Usha Uthup was formerly married to late Ramu Iyer. They have two childrens. She is then married to Jani Chacko Uthup who is from Manganam, Kottayam, Kerala. Now she lives in Kolkata with her husband.

Changampuzha has a unique place among the great poets in Malayalam. This romantic poet was the person who brought the poetry to the masses. Among the lovers of Malayalam language, there won't be a single person without knowing at least a single line of this poet.

Asin (Asin Thottumkal) is a South Indian movie actress born in Kochi, Kerala. Asin did the movie Gajini in Hindi and got noticed in Bollywood. This post, Asin's Profile, has also included photos of Asin. Asin Profile also includes brief history about Asin and her movies.