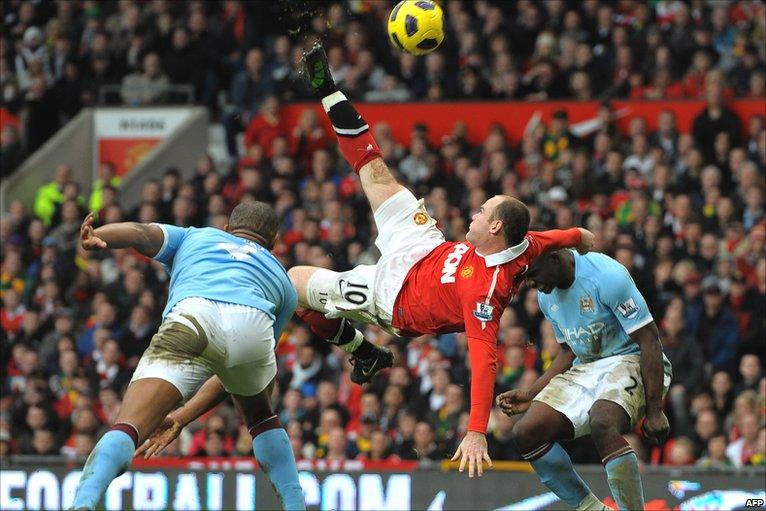 Old Trafford, where the derby match was played between Manchester united and city, had became a venue for a legendary goal, from united star striker Wayne Rooney . This wonder goal may be considered as the 'Goal of the season'. Through this goal united defeated city by 2-1 and secured their lead for the chase of Barclays Premier Champion title.

When the clock shown 78 minutes the score was locked at 1-1. Leaving the goalie as a viewer, Rooney launched himself into the air and acrobatically volleyed Nani's cross into the top corner of the net and made an easy win against the rivals. Afterwards, Rooney was remarkably matter-of-fact about the goal when talking to the TV cameras, although he did concede he'd never scored a better one.This goal has became a matter of talk among the fans and expertise.As well as football is concerned no better goal has conquered such a ranking, as he did.

"Yeah, I think that's my best one. I just tried to get into a good position for when Nani crossed the ball. I saw it come into the box and I thought, 'Why not?' . So I tried it [an overhead kick] and thankfully it went into the top corner."

"Nine times out of 10 they go over the crossbar or wide, but thankfully today it went into the top corner. It's instinctive. You don't have time to think about what you're going to do.", Rooney said.

Replays of Rooney's strike will be broadcast around the world for weeks. Even Wayne seemed a little taken aback by its brilliance as he struggled to find the words to describe how he felt when it hit the back of the net.

"It's indescribable," he said. "When City equalized they started moving the ball a bit and making life difficult for us. But we knew it was important to keep going and try and win the game."

"When I scored the goal, I could see the joy in the crowd, the joy among the players, the manager, the players and all the staff. It was a fantastic moment."
"It was a massive game and we're glad we came out on top," Rooney said. "We knew we had to win today to keep us top of the league and maintain the gap [ahead of Arsenal and City].
"I think this almost certainly rules City out of the title race now, unless a disaster happens.

"We felt we owed the fans a good performance and three points. This keeps us on top of the league, so we're thankful for that."