The cult film of the bygone era, 'Rathinirvedam' is coming again in Mollywood under the direction of T. K Rajiv Kumar. Swetha Mohan is doing the role of Rathi, which was did by Jayabharathi in the yestyear hit. The earlier Rathinirvedam was directed by Bharathan and penned by Padmarajan. Sreejith is doing the role of Pappu in this movie. His debut film in Mollywood, Living Together has just released all over Kerala.

Register here to get all updates on Swetha Menon

Swetha Menon has started working in the set of Rathinirvedam from 10th February, 2011 Friday. The location of the much hyped film is heavily crowded with movie fans and her fans too. Rathinirvedam says the adolescent love of a young boy named Pappu to his neighbour Rathi. In the new Rathinirvedam the character of Sreejith comes to village for a vocation, where he finds Swetha Mohan. The same feelings of Pappu happens here again. 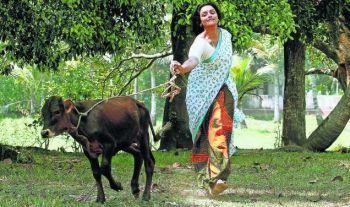