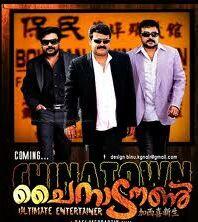 Last Updated on 8th April 2011
One of the most expected multistarrer Malayalam film of 2011, China Town will be released in this April as a Vishu Release. The film will be released in all over the world on April 14 as a 'Vishukaineettam' for Malayalam film lovers. The movie earlier planned to release in April 7 is now postponed to April 14 because of the Kerala Assembly Elections. Now keralites can watch China Town Malayalam film free of cost from the hotness of election. The decision seems to be good that Christian Brothers- the last offering of Mohanlal also there in the theatres which was released on March 18. So there will be two releases for Mohanlal in this summer vacation.

China Town is a 2011 Malayalam Film directed by hit directors Rafi-Mecartin. The film has a huge start cast including Dileep, Jayaram, Kavya Madhavan, Poonam Bajwa, Pradeep Rawat and many others along with Mohanlal. The film expected to be a comedy riot of Universal Star after his super hit film 'Hello' with the same director.

Rafi-Mackartin is coming back with new movie China town. Malayalam three superstars Mohanlal, Jayaram and Dileep are joining together again after Twenty Twenty that produced by Dileep. The film shooting has started in Ootty.

Rafi-Mackartin the comedy hit film directors are making a star combination film in a comercial colorful pattern. Shooting of the film is prgressing in Ootty with the stars like Mohanlal, Dileep, Jayaram and Kavya Madhavan.

Mohanlal-Jayaram-Dileep-Kavya Madhavan new film China Town story, wallpapers,Cast and crew are given in this post.