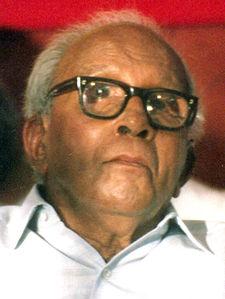 EMS Namboodiripad was a historical figure in the sense that he created history by forming the 1st non congress government in Kerala and in India, forming the 1st democratically elected Communist Government in Kerala, India and in the entire world. He was the 1st non congress Chief Minister and 1st Communist Chief Minister in Kerala and in India. He was one of the founders and a main pillar of Communist party of India.

When Communism was banned and most of the leaders were arrested and it jail, he cleverly evaded arrest by changing his costumes and appearance by make ups. This helped the party as he led it from outside the jail while others were in jail and could not communicate with the masses. He being one of the masses, they helped his out to escape from police. One instance where he escaped is in Alappey. When he was pursued by the police he ran and mingled with the lady coir workers and put a towel over head and started beating the coconut fibrous part. There are such several instances. Even a section of police might have also helped him. He started his political career in Indian National Congress and joined its socialist group. He got disillusioned about the congress and joined the Communist Party and worked for the same. He sold his portion of the ancestral property and donated the proceeds to the Party fund. He was a person who was listened to and respected by his followers as well as his opponents. He was the General Secretary of the undivided CPI and the CPM after the split till his health started failing him.

EMS was born on June 13, 1909 to Parameswaran Namboodirippad in the family of Elamakulathu Mana, a namboodiri home, near to Perinthalmanna. He neglected studies and got involved in politics and to fight against social injustices. He was married to Smt. Arda Antharjanam and had two sons and two daughters. Contribution to Arts and the Society:
During his days there were social upheavals in his community and in other communities in Kerala. He worked with V T Bhaathiripad, M R Bhattathirpad and many others in the fight against the castesim and conservatism and bring about social changes.