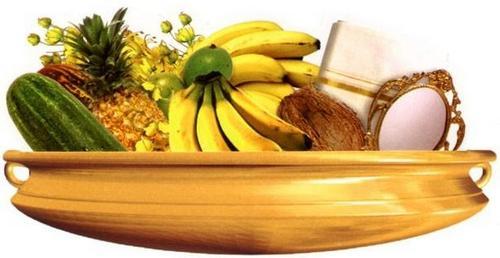 Vishu is a cultural festival celebrated in Kerala, India, the date generally falls on 14th of April. The name 'Vishu' is derived from the Sanskrit word 'Vishua' which means equal parts. This is because only on this day, both the day and night are of equal duration (12 hours each). This festival represents the new year (the first day of Medam) in the Malayalam calendar. The two main rituals performed during Vishu are Vishukani and Vishukaineetam. Kerala has two main festivals namely Onam and Vishu, both of which are related to agriculture. While the festival of Onam represents harvest, Vishu represents tilling (preparing the land for crops). The smell of a special flower called 'kanikonna' (Cassia fistula) which blooms only around this time is enough for people to realize that Vishu is around the corner.

Vishukani means 'The first thing that should be seen after waking up in the morning'. Without Vishukani, Vishu is incomplete. There is a belief that seeing an auspicious kani first thing in the morning brings a lot of luck for the entire year. Superstitious beliefs are that if you do not see a proper kani, then you will have bad luck throughout the year. The kani is arranged by the eldest lady of the house on the previous night after the other members of the house are asleep so that it is the first thing they see at the crack of dawn. She sleeps next to the kani itself before waking up early so that the lamp can be lit with her eyes closed and she also is able to see the kani as first sight.

The kani comprises of auspicious items such as golden cucumber, betel leaves, raw rice (Unakkalari), lemon, valkannadi (a metal mirror with a long and thin handle), halved coconuts filled with oil and kept upright, 'konna', a kasavu pudava (a Kerala style Sarang which is white in color with golden border), golden mango, a holy book (Ramayana) and coins in a metal circular vessel called uruli. This uruli is usually kept in the puja (prayer) room of the house. A nilavilakku (coconut-oil fed lamp) is also kept beside the uruli. It is not necessary to keep all these items. One can keep whichever is available but the only basic element is that the items which are kept should be golden or yellow in color. A cloth is pleated and placed inside a brass 'kindi' (a puja vessel used to pour sacred water). The metal mirror is also kept inside the kindi. This kindi is also placed inside the uruli. At the stroke of dawn, the lady who prepared the kani wakes up each member of the house one by one with their eyes closed and guides them to the puja room so that when they open their eyes, the first sight will be the kani. After seeing the kani, each person reads few slogans from the holy book Ramayana. Some believe that the first page that you open from the Ramayana will have an impact on your life for the coming year. The elderly and sick people, who may not be able to walk to the puja room, will also be able to see the kani when it is being taken around the house. The Vishukani is also taken outside the house to show it to the birds, trees and cows.

Children are very enthusiastic and wait eagerly for this festival because the elders of the family distribute money to each child in the name of Vishukaineetam as a mark of love and affection. Earlier, only coins used to be distributed but in today's world, children wish to get notes so that they can buy anything that they wish and the parents cannot object to it. The vishukaineetam also consists of few 'konna' flowers, gold and raw rice taken from the uruli which are returned to the uruli after the distribution. Some money is also given to the servants, workers and tenants of the house. It should be given freely and also accepted with respect. This is a symbol of sharing the prosperity and wealth.

The young ones also burst lot of crackers on this day. Everyone wears new clothes called Puthukodi for the occasion. Another important aspect of Vishu is the saddhya (an elaborate feast). Since it is a season of mangoes, a food item called Mambazhapachadi (sour mango soup) is very common. The feast usually consists of approximately equal proportions of sweet, salty, bitter and sour items. Two important food items for Vishu are Vishu kanji and Thoran. Kanji is made of coconut milk and rice.

On this auspicious day, many people crowd famous temples like Guruvayur Sree Krishna Temple and Sabarimala temple in order to see Vishukani. Gold is the color that is associated with Vishu. There is a belief that it was on a day of Vishu that Lord Sriram killed Ravana and this delivered the courage to the sun-god in order to rise straight to the Earth. This is the reason why the sun-god appears perpendicular to the world on Vishu, resulting in equal durations of day and night. Because the sun is golden in color, gold became the prime representation of Vishu.

This article is related to vishu festival in Kerala.Vishu 2011 is celebrated on 15th April 2011.

Vishu always seems to be a good season for Malayalam Film Industry. Read here Malayalam film vishu releases in 2011. This article will give you the complete details about Mohanlal , Mammooty, Dileep, Prithviraj and Jayaram Vishu Releases in 2011.

Ms Lakshmi Ramdas has prepared a lucid article on Vishu. Thanks for the same. It will give a clear idea as to what vishu is.
I would like to mention a point or two on this subject. First point is a doubt of mine. It is about vishu meaning 'equal parts'. According to my understanding equal parts comes 2 times a year. Equal parats of day and night comes when the sun is on equator. That happens on 13th or 14th of April Mesha Samkaramanam and at Thula Samkramam - during the mid week of October. I am saying this from my presumption that when earth revolve on its own axis and around the sun, sun's position changes from North to South and from South to North with respect to the earth. That means the sun's position with respct to the earth falls 2 times when Utharayana and Dakshinayana starts.

According to me Vishu means the time of Sun's transition from Meena to Mesha.

Anopther point is that during some of the years, Vishu (new year) and vishukani (seeing good things) hppens sepeately as is in the present year. This year Vishu is on 14th April during day time and Kani is to be seen on the 15th morning.

I also feels that the mirror (Kannadi) is kept behind the uruli in such a way that when we look at the kannadi, we may be able to see all the items kept for the kani in the uruli with their images and our reflected image also.

Thank you very much for your valuable response and points. I agree with you on most of the points. Though i'm not very sure about how many times in a year the duration of day and night are equal. I will have to do some more research on that to be sure. As you said, this year Vishu and Vishukani comes on two different days but to explain this in the article i would have to write about the nakshatras of Malayalam calendar which might become too lengthy. Your point on the valkannadi is also true. It is kept in a way that one can see ourselves as well all the items kept inside the uruli.