It was a great chance for all prithviraj fans to watch the live webcast of their dear actor's wedding reception live streaming on the internet. www.parinaya.in was the website which put forward the live streaming of the actor prithviraj's marriage reception live webcast on internet on may 1 6.30 to 9.30. There was no information that spiderkerala got from anywhere in the internet that the marriage party of the actor will be having live webcast on may 1st from 6.30-9.30 pm. So for us too it was less than an hour before got a scoop in a tweet that the live streaming of the wedding party was on air from 6.30-9.30, 1st may 2011. With less than a time we(spiderkerala) had done our best to pass the message of the live webstreaming through our articles and posting message in twitter & facebook. But we too have some limits. 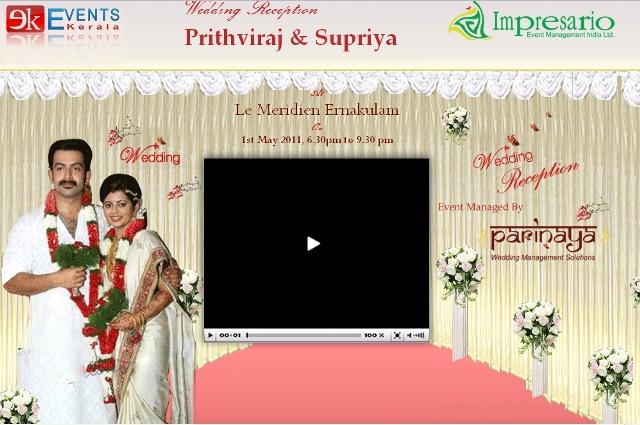 Do you want to Know Spiderkerala more

Spiderkerala.net is an online website which features all information about kerala. It is one of the most active website in kerala with around an average of 15,000 daily vistors. We deal with information related to kerala and we have taken initiative to give maximum publicity to most of the topics which people live to know. Spiderkerala acts as an online newspaper to which updates news and articles. Spiderkerala is the only website which gives the movie review of all movies before any other website can reach it. We have around 6,000 active members who are working 24x7 for the website contributing daily information related to kerala and also around the globe too.

Unlike any other website which gives information about information related to movies in kerala, spiderkerala.net has a rich amount of content writers who like to write on movies which releases on time. We have as much talented writers who could write on each movie and give much more publicity to each movies. Internet has become a media which attracts more than any other media. We give the exact release date, preview, cast & crew & later our movie writing specialists will give their verdict in the form of review after the first show of the movie. Track records of spiderkerala have proved that we are in the top list as the most authentic website to give information about each movies on time. So directors & producers, contact us as we are able to give the maximum publicity to each movie.