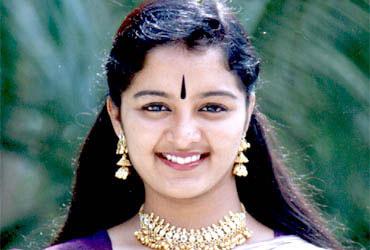 Manju Warrier is a very popular Malayalam actress of the 1990's. She has worked in the film industry only for 5 years but still she has managed to attract numerous fans with her beauty and talent in acting. In a very short period, she established herself as an actress par excellence. Manju was one of the leading actresses and was considered as the top heroine in Mollywood industry during her professional career. Unlike many of her contemporaries, Manju has acted only in Malayalam films and not in any other languages. Her debut film was in 1995 when she acted in the film Saakshyam. Manju Warrier has a mesmerising beauty which makes her look stunning both in traditional costumes as well as in the modern western wear. There are very few actresses who look enchanting in both these looks together. Manju Warrier never resorted to skin show in order to attract fans because she had enough acting talent to gain her the highest pedestal in the film industry. The reasons for her success are her down to earth nature along with a next-door girl features and realistic portrayal of her characters in her films. Manju's talent is so immense that it is considered as god's gift.

Manju Warrier was credited with the National Film Award (Special Jury Award) for her film Kannezhuthi Pottum Thottu in 1999. Other than this, she has won many more awards and critical acclaim. In her film Daya, Manju disguises herself as a man and does this role with full perfection. In a span of four years, Manju Warrier has acted in almost 20 Malayalam films and majority of these films have been hits at the cinemas. Even today, though she has stopped acting, Manju Warrier is one of the most loved and admired actresses in Malayalam. She was the first choice and was offered the main role in the hit film Alaipayuthey by director Mani Rathnam but she was not able to do the film due to lack of dates and also due to her sudden marriage to actor Dileep.

Manju Warrier was born in Kannur, Kerala on 1st November 1978. Her father is an accountant and her mother is a housewife. She has one brother, Madhu Warrier who has also entered the cinema field as an actor but is yet to prove his mettle in the profession. Her schooling was at Chovva High School and Chinmaya Vidyalaya in Kannur. Manju Warrier is not only talented in the acting field, but she is also a great dancer. While studying at school, she showed extraordinary talent in dancing and has won numerous awards. She was also honoured as Kalathilakam (a title bestowed to an artist who proves her mettle in many artistic fields during a sub district youth festival) in the Kerala Youth Festival for two years. At the tender age of 17, she acted in her debut film in Malayalam industry named Saakshyam in the year 1995. After a year or so, she acted in the movie Sallapam (1996) opposite co-star Dileep. The film turned out to be a huge hit. She has won a lot of critical acclaim as well as commercial acclaim for her work in many films such as Aaram Thampuran, Summer in Bethlehem, Daya, Kaliveedu, Kanmadam, Pranayavarnangal, Kaliyaatam and Krishnagudiyil oru pranayakaalathu. 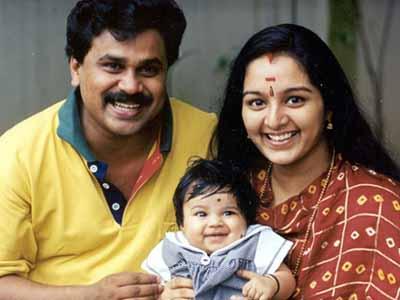 On October 20th 1998, she tied the knot with actor Dileep and has stopped acting since then to become a homemaker. This came as a big shock to her fans because while it is very rare to see an actress who acts superbly and also looks beautiful, Manju Warrier put a halt to her profession before even satisfying her fans with a suitable number of hit films. She exited from the film field at the very peak of her career. The marriage took place at Alwaye Sri Krishna Temple. Currently, Manju Warrier lives in Alwaye with Dileep and their daughter Meenakshi.

Apart from these awards, Manju Warrier has also won a Special Jury award under the National Film Awards for Kannezhuthi Pottum Thottu in 1999.