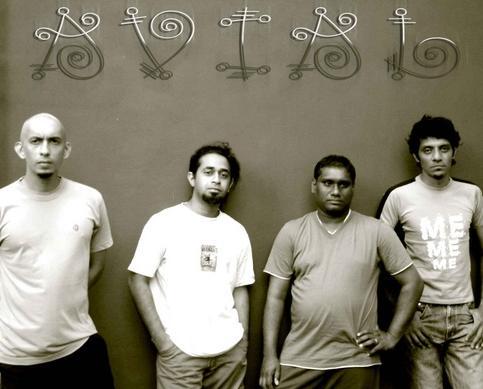 Avial is an Indian alternative rock band, originated in Kerala, India in 2003. It combines native folk music from Kerala and rock music. The band consists of Tony John on the vocals, Rex Vijayan on the guitars, Mithun Puthanveetil on the drums, and Benny on the bass.

The name is named after the South Indian dish, Aviyal, which is a main part of the Sadya, and is made with a mix of contrasting vegetables. Hence, the band, which combines traditional Kerala music and rock music, gets its name from that.

Avial brings in the social scene of Kerala through its music. The plight of farmers whose crops were seized by the local landlords and folk songs that were predominantly sung by the workers in the paddy fields are clearly portrayed. This is a new trend when compared to other rock bands and their music.

Avial has devised its own name for the music they come up with called 'Alternative Malayali Rock'. The lyrics used include Malayalam, and the band's maiden album had excellent instrumental play, brilliant singing, and lyrics which are beautiful. The album received generally positive response from rock enthusiasts in India, especially the youth.

They have conducted live shows in major cities like Mumbai, Delhi, Bangalore, Madras, Trivandrum, Cochin (Ernakulam). They have also conducted shoes abroad, in places like Dubai, Mauritius etc. They also carry the honour of being the lone band to be selected to perform at the Sakifo (Reunion) World Music Festival in Mauritius, along with 40 bands. The popular Italian band 'A67' was so impressed with their performance that they approached them to be a part of their forthcoming album 'Suburb'.

AR Rahman had also taken out the band's name for their unique style of combining folklore and urban rock sensibly, during the press meet for the reality show for rock bands hosted by AR Rahman and Popular record label Phat Phish Records. Avial was also the only band to be invited from Kerala, for the 'Rock On' humanity concert, for the victims of the Bihar foods. The concert was spear headed by Farhan Akhtar.

Avial also won six awards during the Jack Daniels Annual Rock Awards 08-09- Song of the year, Album of the year and Band of the year in both the popular choice and critics award.

An Ernakulam based guitarist, he has some renowned performances in India and abroad to his name. He was part of a popular band Motherjane from 2000 to 2003. He was also part of a novice German hip-hop band "Intensive Erfrischung(Intensive Refreshment)" based in Munich and is also actively involved with Daksha Seth's Dance Company, concerned with performing on stage contemporary dance. Gibson Guitar Corporation, USA offered him to be their endorsee for the latest high end series guitar.

MITHUN PUTHENVEETIL
Mithun is the drummer of Avial from Kannur. Versatile on the tabla as well, Mithun dabbled with pop music before finding his true calling in funk and rock. He has distinguished himself through a Heavy Metal band named Rage based in Trivandrum. He is the son of veteran politician Mr. Kadannappally Ramachandran.

TONY JOHN
Tony is the band's current vocalist. During the 90's he worked with the band called Karizma which led him to fame. He too has worked with the Daksha dance company.

Binny Isaac has currently replaced the former bass guitarist Naresh Kamath. A Trivandrum based guitarist, his home town is Ernakulam.

Anand Raj Benjamin Paul (lead vocals)
Anand is from Thrissur and was the lead singer who brought the special touch in the band's self-titled album. The singer, initially an English teacher, has many stage shows in India and abroad to his credit and interestingly, he sang jingles to unwind. He decided not to continue any longer with the band, due to personal reasons.

Naresh Kamat (bass guitar)
Naresh Kamat was the only non malayali in the band, and is presently working with Kailash Kher's band.

Their recent album was released in the month of February 2011. The album, containing 8 tracks will include 'AanaKallan' among them. On 14th August 2010, the band opened their concert at St.John's Medical College, Bangalore, with a new track titled 'Ayyo'. Tony John will feature for the first time on vocals in their next album, which will include a different sound when compared to their debut album.