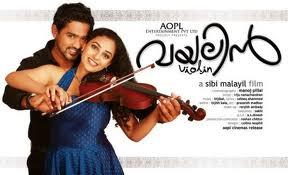 Violin, the new Malayalam film by Sibi Malayil is related to music & romance. Here Asif Ali plays the role of Aby & Nithya Menon plays the role of Angel. Angel who is from an Anglo Indina family in Fort Kochi, is fond of music & have her own violin class. Aby, who is also fond of music meets Angel. The story of this film is related to Aby & Angel who were brought together by music.