Karimeen, the state fish of Kerala 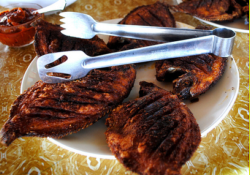 Karimeen which is also known as Pearl spot fish is one of the most important fish species in Kerala. Even though it was officially announced as the 'state fish of Kerala' in only the year 2010, Karimeen is the most influential fish in the lifestyle of Kerala. The power of the karimeen dishes to dissolve our taste buds is well known. Apart from Kerala this high nutritive fish is also found in other parts of India and Sri Lanka. 'Karimeen Pappassu curry' made by the beautiful blend of coconut and karimeen, hot karimeen chilly curry, Roasted karimeen with lemon are the highly popular karimeen dishes. Plenty of local dishes with varying flavors and tastes using karimeen are available in carious parts of Kerala. As this justifies the economical and tourism importance of karimeen in our state, the promotion and farming of the fish ahs to be done effectively across Kerala.

As said earlier Karimeen is a highly nutritive food. Along with a good amount of meat Karimeen also includes fat, phosphorus, calcium, ash, iron and water. Percentages of these contents inside karimeen is give below.

Habitats and Features of Karimeen

Karimeen fishes have the special ability to live equally in both pure and saline waters. They are mainly found in rivers, ponds, farm fields, canals and estuaries. Karnataka and Orissa are the other major states where karimeen is found in India. 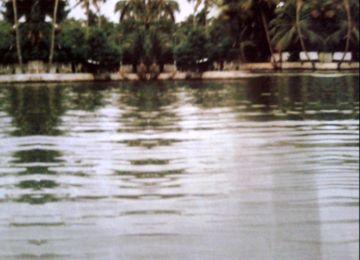 Due to the favoring geographical conditions of the coast lines in India almost 10percent of the local pure water fish found in Kerala are karimeen. But like many other organisms in our planet over exploitation and unscientific practices have resulted in the negative population of karimeen in the recent times. But these problems can be easily solved with the aid of habitat conservation programs, by facilitating scientific aids to provide reproduction environment and with the help of better awareness among the people. It is also time for many job seekers to take Karimeen farming as a profitable business especially in Kerala.
There are wide variety of reasons for the wide acceptance and better popularity of karimeen in Kerala. These are given here.

Most astonishing features of Karimeen

1. Ability to live in varying genre of water resources.
2. Ability to make their living together with a wide variety of fishes.
3. Lively growth rate.
4. High survival rate of young ones.
5. Delicious taste and flavor of karimeen.

Karimeen have an elliptical black body with shiny white diamond like spots all over the body. It is this physical appearance which gave fish the name 'pearl spot' or 'Karimeen'. Even though the word 'kari' point to a dark black color the fish has a mixed combination of green and black on its body. Dark black strips (usually 8 in number) are found from head to tail. A fully grown Karimeen have about 40 cm length and about one and half kilograms of weight. Apart from the vegetative diet they also feed on planktons, small worms and small prawns. Spirogyra is the most favorite food for Pearl spot fish. Fragilleria, Coscinodiscus are the other major foods of karimeen. 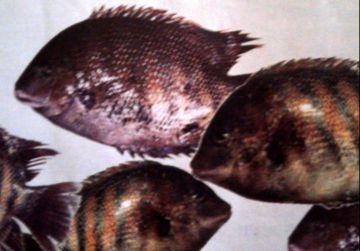 The most popular method is the cultivation using man made as an alone or composite farming. 2x2x1.5 to 100x100x100 meter boxes are in use for the purpose. Under Low volume high density methods 500 young karimeens can be allowed to grow per 1x1x1 meter of volume. About 40 kilograms of result can be expected.

1. During January and March, Choose seeds of 2-5 cm long.

2. Factory foods with high FCR (2:1) can be used for the purpose. Vegetable pieces and algae is also allowed.

4. Leaving few matured and productive fishes in the pond itself will make the way for laying eggs during the period of December to February.

5. Due to the extra ordinary ability of karimeen in looking after their young ones survival rate of those eggs will be huge.

6. Fishes like catla and various carp species can be used for composite cultivation along with Karimeen.