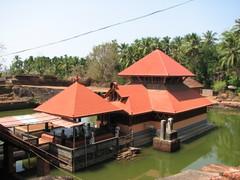 The Ananthapura lake temple is located as the name indicates, in the middle of a lake known as the Ananthapura Lake. The deity is of course Anantha Padmanabha Swamy – the lord resting on the Anantha the Serpent king with 7 hoods as a cushion/bed. While the lord in Ananthapura Lake is in a sitting posture, the lord of Thiruvananthapuram is in a reclining (lying in deep meditation – yoga nidra) posture.

The temple is located in the Kasargod District of Kerala State. It is 5 km from Kumbla, a small town in the district and 13 km north of Kasargod town along the National Highway. The temple is in a beautiful lake, situate on a calm, tranquil and beautiful rocky hill. From the top of the hill the places around can be seen as a beautiful green natural scenery. The temple houses a beautiful of the deity of Sree Anantha Padmanabha Swamy seated on the Adi Sesha. This shrine is an ancient one with a known status from 6th century onwards. The shrine is having a prakaram (Chuttambalam) all around with walls like an enclosed veranda. The walls decorated with murals. There is a cave which ends in a pond. It is believed that the level of water in the pond will be at the same level at all seasons without increasing or decreasing. Near to the temple there is a rivulet known as papanasini. It is believed that the papanasini has the divine powers and will cleanse the souls by removing the sins. This temple has one of the best Koothambalams in Kerala. The shrine is supported by 30 granites and the floor is made by square granite blocks.

The unique attraction and feature of Ananthapura lake temple

It is believed that there is crocodile in the temple. This is the main attraction and uniqueness of Kerala's only lake temple. The local call it as Babia and believe that the crocodile is there to guard the temple and the hidden treasure believed to be there in a cave in the lake. It is also believed that there will only one crocodile at any time. If one dies another mysteriously comes from somewhere. According to the local people and one of the trustees Sri Ramachandra Bhatt, the present crocodile is about 60 years old, though some people believe it to be 150 years old. This crocodile is supposed to be purely vegetarian. It eats the offerings of the temple given to it after the noon offerings. The main item is the nei payslip (rice porridge with jaggery and ghee). The locals and the temple authorities say that there are fishes the lake but the crocodile does not eat them nor does it hurt anybody. They also feel that the crocodile gives indications if any impending unhappiness is going to take place in the area.

Another feature of the temple is that the original idol of the deity is made of a compound about 70 medicinal substances known as kadu sarkara yogam. This original idol is kept near the present one made of Pancha loha metal in 1972.

One more unique feature of the Ananthapura Lake Temple is that any one from any religion, caste or creed is allowed here.

It is believed that this is the original seat (Moolasthanam) of Sri Anantha Padmanabha Swamy of Thiruvananthapuram where he reclines on the serpent. As per one legend, the famous Viluamangalam Swamiyar used to come to the Ananthapura Lake temple, as the swamiyar is a person always on travel from one pilgrim center to another. During his stay he used to perform poojas as he does in all other temples he visit. Viluamangalam Swamiyar was supposed to have the fortune of of seeing the gods and goddesses. In Ananthapura, when he offers pooja to the deity in the form of a lad, a boy used to come and pay mischief with him. The swamiyar used to enjoy the pranks and mischief of the boy and tolerate on most of the time. Even if he is annoyed, he will only mildly persuade the boy to desist. But on one occassion, when the pooja was being done, the body was uncontrollable and the swamiyar was terribly annoyed and pushed the boy and the boy fell in the lake. From there the boy told the swamiyar that if the swamiyar want to see him again, he should go to the Ananthan forest. The swamiyar regreted his action and started the journey in search of the Ananthan Forest, halting at the pilgrim centers like Guruvayur, Chottanikkara etc. Finally he came to the place now known as the Thiruvananthapuram which was a forest at that time. He could see the divine form of Sri Maha Vishnu in a gigantic form in lying posture. He could not see the full form of the lord and he requested the lord to be in a smaller version so that he can see the lord fully. The lord agreed and reduced his size to 18 feet in length. Subsequently, he made some schedule as to how the poojas are to be conducted and initiated the structure of the temple.

It is believed that the there is a cave-way connecting the Ananthapura temple with the Thiruananthapuram temple and the cave is having hidden treasures.

The annual Festival is held on one day in April every year. The festival is known as Thepotsavam locally which is known as aaraattu in rest of Kerala.

Getting to Ananthapura lake temple

Hi, Thanks for giving such an exotic article.

This is of course a fabulous article about Ananthapura Lake Temple in Kasargod.