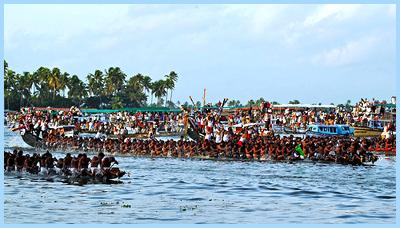 Among the above mentioned boats, the Iruttukuthy boat is designed for speed & transportation during the night. But when considering the Veppu Vallam, remember that they can have a capacity upto 45 persons only. Also note that the one end of this Veppu Vallam is higher than the other end. The Churulan Vallam has a circular shape when compared to other boats. Chundan Vallams are the famous attractions of snake boat races & they are also known as beaked boats. Odi Vallams were used for piracy works in the olden days. I think most people have noticed about the length of the race course in the Nehru Trophy Boat Race. This race course is having a huge length of about 1370 meters & there are several tracks in it for conducting the competitions. When the competitive boats are moving through this race course, it will be a thrilling experience for the people. People who are able to go & watch the boat race will see this in the Punnamada Lake while others will watch it on TV.

The Nehru Trophy Boat Race held at Punnamada Lake in Alappuzha district of Kerala state, India, was organized in honour of Pandit Jawaharlal Nehru (first Prime Minister of India) on his visit to Kerala state in the year 1952. After enjoying the snake boat race, Nehru announced the trophy for the winners of the race. So remember that Nehru Trophy is the trophy given to the winners of the famous Nehru Trophy Boat Race. This trophy is having the shape of a snake boat in silver & apart from this it is positioned on a wooden abacus. 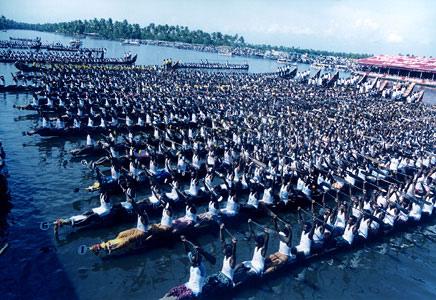 For the visitors of Nehru Trophy Boat Race

The visitors of the Nehru Trophy Boat Race should purchase tickets only from authorized ticket counters of Government departments & tourism information offices. Also you must check the tickets for the authorized seal of the committee & serial number. Another fact is that the authorized counters can be identified with banners having logo of NTBR. In general you must remember not to purchase tickets or complimentary passes from unauthorized person. Tickets without seal or serial number should not be purchased. Donot bring liquors & dangerous items to the pavilion. Also note that smoking is not allowed in the pavilion. Parking facility will be available only upto 11:00 AM in Municipal Stadium North of Zillah Court Bridge. If you need any help, you must contact the control room 2243441/100(police).