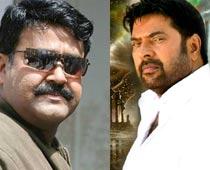 An incometax team which around 200 officers stormed into the houses and offices of malayalam super stars mammooty and mohanlal on 22nd july 2011. The raid was conducted by the income tax officers as the income tax department found the super stars failed to remit tax proportionate to their earning.

According to reports from different media, both superstars homes in Kerala,Tamil nadu and Karnataka were raided at the same time and the IT officers have seized very valuable documents. The IT officials have convalesced two ivory tusks along with several incriminating documents from the residence of mohanlal. Two rooms of one of the house of mohanlal could not be opened as it was locked of laser technology. The income tax officials had taken statements from Antony Perumbavoor, partner of mohanlal. Meanwhile mega star mammooty at chennai was busy with the marriage arrangements of his son where the IT team raided his house in Chennai. They seized around 15 lakh rupees from mammoty's residence. According to latest reports mammooty reached his house at panampally nagar and the IT officers are questioning him.

The IT raid started today (22nd july 2011) morning at 6 am. Houses of mohanlal in Egmore and his restaurant in banglore were included in the raid apart from his houses. Mohanlal is now is rameshwaram for the final shoot of his onam release movie pranayam. This would be for the first time, Malayalam actors had to face the IT raid. This breaking news had really alarmed the film industry and reports say that all actors and production units have waked up to update their returns. Mohanlal became the news attraction last month as he bought an apartment in Burj Khalifa.

Pranayam, even though not mohanlal’s 300th movie, will be released this onam. Slated to get released on 7th September 2011,the movie is directed by blessy. The story of the movie tells the love relationship of different generations. Read the complete story behind the movie pranayam.