The soups are most comfortable dish for monsoon season. Drink hot soups that warm up your heart during monsoon season. it is very tasty and spicy so kids and teenagers like it very well. During monsoon season soups giving good relief from cold. Traditionally the Kerala peoples drinking soups during the 'Karkidakam', a month in Malayalam calender.some of recipes are given here. 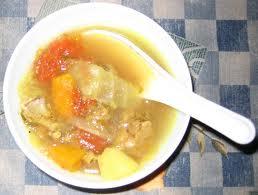 Preparation Method of Mutton Soup Recipe
1) Take mutton, mutton bones, and 10 glasses of water, carrots, onions, bay leaves, pepper corns, salt mix it well in a large bowl and allow to boil on low heat for 2 hours. After 2 hours the about less than 6 glasses of liquid remained in the bowl, then allow it to strained in to another bowl and add corn flour slightly heat until the soup thickens. Then add salt, peeper powder, and boiled mutton pieces which we strained before then allow cooking for another 5 minutes. Serve it as hot.

Preparation method of mixed fish soup recipe
Take the fish, prawn and crab, squid and Olive oil are mix in a large heavy based pot then allow to boiled 30minuts. After boiling add red onion, vegetable stalk, Karuka leaves, black pepper cones, tomato, garlic and salt then continue the boiling another 30minuts and allow it to thickens. Then take the pot from heat, add pepper powder and bread then decorate the soup with onion leafs, celery leaves and saffron threads. Serve it as hot.

Pork with prawn soup for monsoon

Preparation method of pork and prawn soup
Soak chopped mushroom in boiled water for 20 minutes for softening. Heat the sesame oil in another pot and add chopped pork, prawn and chopped mushroom then mix it well and add some water and allow it to cook well. After cooking add vinegar and Soya sauce will give the soup plenty flavor.

Beat two eggs in a bowl and slowly pour eggs into the pot, stir it well, turn heat down to medium-low to let the soup simmer. Dissolve 1 table spoon of corn flour in some cold water and add it to the pot to thicken the soup. Then add pepper powder and serve it as hot.