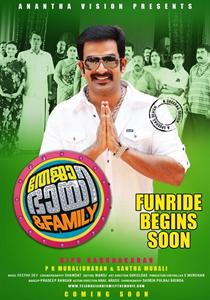 The story is of a small boy who had to leave his native place at Thiruvananthapuram. He just drifts and finally lands up in Bangkok. At Bangkok, he becomes smart and ends up as an underworld don, Theja Bhai (played by Prithviraj Sukumaran) of Bangkok without challenge to him. While he was enjoying his clout as the don, he comes across a pretty girl Vedika (Akhila) a Damodarji, a well placed businessman in Bangkok. Theja Bhai feels that though it may be possible to get the girl by using his wealth and force, better way is through love. Theja Bhai poses as gentle man for fear her rejecting him in his real position. So he behaves like gentleman to Vedika and with his followers he becomes the Don Theja Bhai.

Shakkela
Along with other supporting cast, Yester year glamour queen Shakkela is having a major supporting role. After absence from the Malayalam cinema scene after her performance in 'Chhota Mumbai' she is coming back to the cinema world. During her hey days she held other films to ransom due to the popularity of her movies.

Deepu Karunakaran
As the script writer and director of the film, he has brought in his expertise from his experiences of his runaway hit film Crazy Gopalan.

Akhila
The ex compeer (ex presenter) of the hit programs Aseanet Realty shows 'Manju Star Singer Junior and Vodafone Thaka Dhimi' is already famous with the Malayalees and is the favorite heroin after her good performance in her maiden venture "Karyasthan" opposite to the super star Dileep.

Prithviraj
He is very much excited about the film as this will be his first full length comedy thriller, about the best script of the film and the excitement and different experience for the Prithvi fans. After this film the popularity which is already at a very high level of the youth icon of the South is expected go upward further.