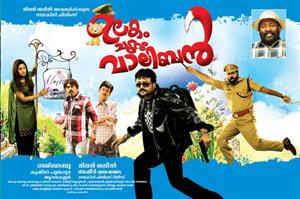 Jayashankar (played by Jayaram) a village vegetable vendor. He is not able to meet both ends. He gets into financial troubles and decides to go to city for better earnings. Accordingly he goes to city with his cousin (played by Suraj Venjaramoodu) to settle down there. In the city his life becomes like the proverbial 'frying pan to fire'. While trying to solve the crisis, the film goes through several interesting twists to make it enjoyable. In this film Jayaram has gets 3 types of role models.

This film is the 6th successful story and script of Krishna Poojappura. Besides he has given many comedy entertainer of Jayaram.

With the above backgrounds the film will be a hit at the box office.

Mithra Kuryan will be the female lead.

Kunchako Boban is all set with his new Malayalam movie Dr.Love which is getting released in September. Chackochan would play the lead character where is is called by the name Love Consultant. He would be the only actor in malayalam who had done 5 full length till date in 2011 as hero. Read about chakochan’s upcoming Malayalam movie Dr.Love.