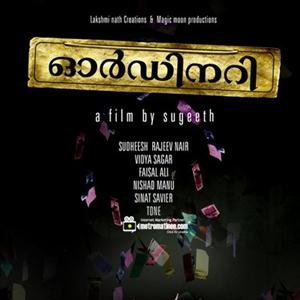 Ordinary is an upcoming movie directed by debutant Sugeeth, a former associate of Kamal. The script of the film, based on the story of director himself, is penned by Nishad K Koya and Manu Prasad who are newcomers as well. With Kunchako Boban in the lead, the film comes with a huge cast.

Ordinary presents the lives of people in a village called Gavi in Pathanamthitta. A KSRTC bus is the only medium of connection between the village and the outer world. The relation between the bus employees and the villagers forms the soul of the story. Kunchako Boban portrays Irvaikkuttan Pillai, the bus conductor whereas Biju Menon plays the bus driver. Ann Augustine plays a postwoman, the female lead. The cast will also include fronline actors like Asif Ali, Unni Mukundan, Salim Kumar, Lalu Alex, Babu raj, Jishnu and newcomers Shritha and Vaigha.

Asif Ali will be teaming up with Kunchako for the third time after the much lauded 'Traffic' and the Joshiy flick 'Sevenes'. The film claims to be a family entertainer filled with situational humour. The primary shooting locations are Gavi and Pathanamthitta.