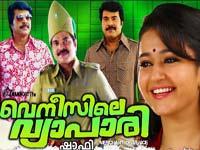 Mammotty, Shafi and Albert James are teaming together in the upcoming movie of Malayalam Super star in Venicile Vyapari. Venicile Vyapari is Shafi's fourth film with Mammotty after the superhits movies Thommanum Makkalum,Mayavi and Chattambinadu. Shafi has been on a royal ride this year with both his films 'Marykkundoru Kunjadu' and 'Makeup Man' turing out to be hits. The story and script is written by Albert James. This is the Albert's fourth film after superclass movies Classmates, Cycle and Ividam Swargamanu. This film is going to be a superhit as the film is directed by one of the best commercial Malayalam film director with one of the best writer in Malayalam film industry with the Mega super star of Malayalam Sri Bharath Mammoty.

Eventhough the title suggests a merchant in Venice (Venicile Vyapari), this movie has nothing to do with venice or with William Shakespeare's famous play 'The Merchant of Venice'. This name is given as Mammotty is doing the role of a coir business in Alapuzha and Alapuzha is known as the 'Venice of the East'. The story revolves around a murder mystery happened in 1980s. Mammotty is doing the role of a coir business man as Pavitran. But before he was in Police. He lost his parents when he was young. Later he was forced to join police a constable even though it was not his ambition. So later he quit his job and starts a coir business in Alapuzha. Kavya Madhavan is playing the role of Ammu, who is the leader of the working force in coir factory. Mammotty is also appearing in a third role as well, that has been kept a suspense. Poonam Bajwa, a super star actress in Tamil and Telungu is also doing a major role in this movie. She is essaying the role of a rather bold and brave girl in the film . This is her second movie in Mollywood.

The most attracting thing is that three super star are joining together in this movie. So we can hope the best from the part of direction, story & Script and acting. This is the first film in which all three are teaming together. This year has been a good one for Shafi and James Albert. So the movie lovers are expecting a lot from this team. The film is expected to reach in theatres on November 4th.