While the country dance along with the rocking song Chamak Challo, here comes exclusive news related to Sharukh Khan's upcoming bollywood flick Ra one. Just few days remaining for the movie to get released world wide, Ra One has surpassed various records made in the past. This most expensive movie ever made in India has created waves before the release which is slated on 26th October 2011. The television broadcasting rights had been acquired by Star India for 40 crore. This would be a record as it has surpassed the previous record of 3 idiots which was sold of 33 crore. T- Series had bought the music right for 15 crore. 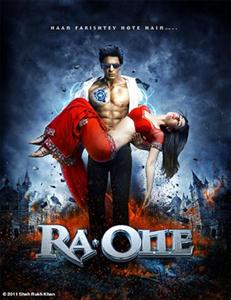 The distribution right has been sold to Eros Entertainment for 77 crore. The marketing strategy made by the producers of Ra.One should be appreciable. A budget of Rs 52 crore were spend only for marketing the movie in which 15 crore is being utilized for online promotion. This would be the most ever promotion done for a movie in bollywood. Joining with U Tube the movie has been promoted virally which had done the real show. The trailer and songs are being widely appreciated world wide. Akon's Chamak Challo has become a trend setter as even small children dance to the steps of the song. This Indian Sci- Fi entertainer holds the feather on the cap to be the first movie produced in India to be released in 3,500 theatres.


The Premiere of Ra.One would be on October 24 scheduled to be held in Dubai. As per reports there would be more premieres in London, New York and Toronto on October 25.

This sci- Fi movie has a long star cast other than Shahrukh Khan and Kareena Kapoor in the lead. Other cast includes Arjun Rampal, Shahana Goswami, Dalip Tahil and Tom Wu in supporting roles. Rajinikanth, Sanjay Dutt and Priyanka Chopra are also making special appearance in the movie. The news of Rajanikanth being a part of the movie has already made the tamil movie lovers to have a lot to celebrate.

Senegalese American singer Akon had made the Indian movie lovers to dance according to his fantastic voice in Chamak Challo and other few songs too. Akon has sung the tamil version of the song too.

So movie lovers hold your breath and count on the days – Sharukh Khan and Ra.One are just near the theatres to entertain you.

Did you like reading this excellent article? The author of this article had taken much pain in doing much research to bring up this article. Do you like to read more about Sharukh Khan and Ra One? The author is ready to write more on it. Mean while do you like to congratulate him for his effort? Do give a credit to the author by using the social network buttons embedded here. Please share this article with your like ones.