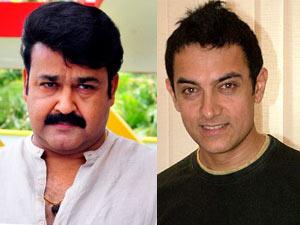 What if the two superstars share the silverscreen ? The fans will be on rapture to see their heroes Aamir Khan and Mohanlal together, as the two versatile actors are to reportedly unite for a film. The news never ends there. It is Priyadarshan who brings them together for his new Bollywood flick. The film is centered on a theme regarding AIDS awareness. The movie will have eight protagonists, as reported. Mohanlal and Aamir Khan will portray each.

The other six heroes are yet to be decided and supposed to be played by proved actors as well. As the film discusses a serious topic, the audience are warned not to expect the usual ingredients of a Priyadarshan film. The film won't be having comedy, action or anything that kind what will be an element of frustration for the fans. Nevertheless, they will be cheering for their super stars.